Pakistan's flood victims save what they can

For the past two weeks, Kaywall has spent 12 hours a day moving his family's livestock from his inundated village to the small town of Pingrio in Sindh province in the south. 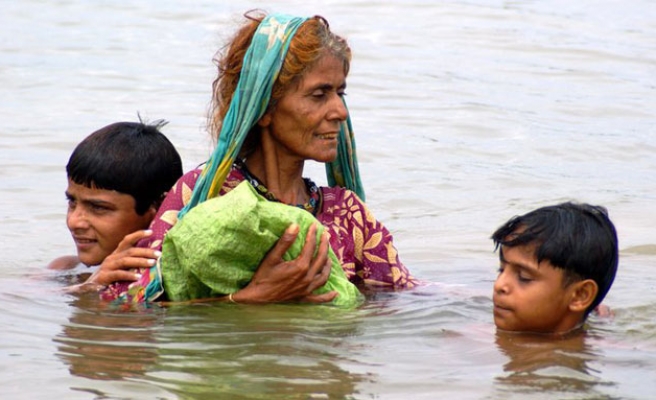 Pakistani soldiers in inflatable rescue boats peered across kilometers of flooded farmland and spotted a man wading through waist-deep water desperate to move his goat to high ground.

For the past two weeks, Kaywall has spent 12 hours a day moving his family's livestock from his inundated village to the small town of Pingrio in Sindh province in the south.

The goats are the only thing he has managed to save from raging waters which swept away his house and belongings.

Like many other flood victims, he awaits help from Pakistan's cash-strapped government.

"My house was completely destroyed," said the construction worker, whose family is stranded. "The government has not done anything for us. They are not around."

The scene, being played out in many parts of Sindh, was a troubling reminder of floods which ravaged much of Pakistan in late July and August last year.

Pakistan's civilian leaders were slow to respond, leaving the far more decisive military to take charge of rescue and relief efforts, along with international aid agencies.

More than 300,000 people were made homeless. Frustrations with the government are running high. On Wednesday, 80 men blocked the main road to Hyderabad, the biggest city near the flooded areas. They are demanding help from the authorities.

Victims of Pakistan's flood are at growing risk of potentially fatal diseases, aid groups warned. The director-general of the Sindh Health Department, Hafeez Memon, said there were 2,000 confirmed cases of malaria and the number was likely to rise.

A 70-year-old woman lying on the side of a road with plastic bags containing her meagre belongings and her two family buffaloes tied to pegs said she felt helpless.

"No one has come to help, no doctor has come to see me. I don't think I am going to live much longer," said Allah Bachai, who said she had heart disease and was breathing heavily.

Entire villages are submerged. Only roofs of houses or the tops of trees are visible. Some people who thought they had found shelter were suddenly uprooted by raging waters again.

In a vast expanse of water that swallowed up houses and farmland in one area, only part of a blue and white tent was visible.

Many wondered how they would survive.

"We are rice farmers and our crops are destroyed. We had animals but they died. We have nothing left, no income," said a 25-year-old woman named Amna.

Some people were able to reach the one road that leads to Pingrio, which is flooded in some sections and is surrounded by water on several sides.

The 2010 floods killed about 2,000 people and made 11 million homeless in one of Pakistan's worst natural disasters.

About 800,000 families remain without permanent shelter.

Victims of the new floods face uncertainty as they struggle to come to terms with what has happened.

"The flood was over my head," said Alam, a 31-year-old tenant farmer with four children. "It came suddenly in the middle of the night while we were sleeping."