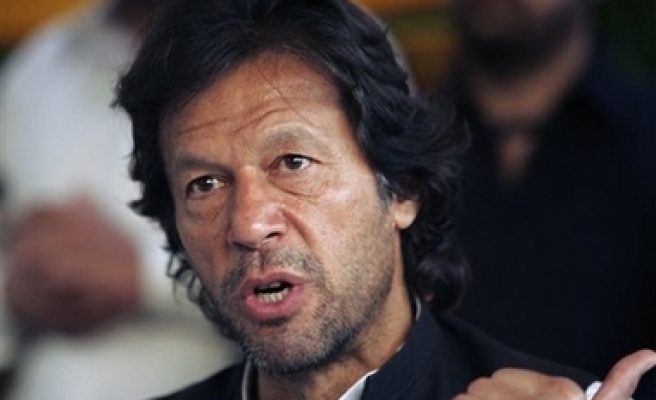 The former cricketer spoke out on Thursday after the U.S. State Department issued a statement in support of Prime Minister Nawaz Sharif’s government and warned against "undemocratic change" in Pakistan.

Khan’s Pakistan Tehreek-e-Insaf supporters have been protesting outside parliament for a week, calling for Sharif to resign over allegations of fraud in last year’s general election.

"We are not slaves of America," Khan said. "We do not polish their shoes."

In an emotional speech outside parliament -- his fourth of the day -- Khan called for Sharif to resign, accused him of using the Pakistani and U.S. military to support his rule and demanded the State Department withdraw its statement.

Addressing U.S. Ambassador Richard Olson, he asked: "Are we [Pakistanis] children of lesser a god? Why is there one law for us and another for you."

Switching to English to speak to the U.S. directly, he continued: "I want to tell you -- don't take sides. How can you say Nawaz Sharif is a legitimate prime minister of Pakistan when his own ministers accepted rigging in elections?

"Remember, a prime minister like Imran Khan can be your friend but not a stooge like Nawaz Sharif."