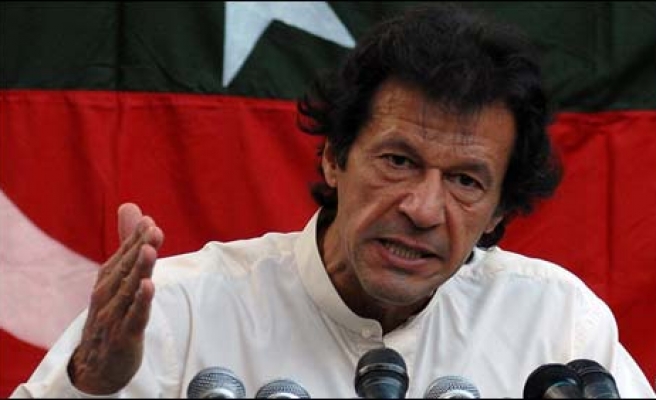 Pakistan's cricketer-turned-politician Imran Khan has demanded the formation of a body that would bring together investigators from the country's highest court and the two top spy agencies to probe an alleged fraud in last year's general elections.

Khan has been staging a sit-in protest in front of the parliament with his supporters for nearly three months against the alleged fraud in May 2013 polls that brought Nawaz Sharif to power.

"The government should set up the commission by November 30, otherwise, it will be difficult for Nawaz Sharif to run his government any more," an emotionally-charged Khan told a public gathering Sunday in northeastern Rahim Yar Khan district, setting a six-week deadline for the commission to come up with a conclusion.

"Nawaz Sharif may serve as the premier till the completion of investigation in six weeks. If the commission declares the 2013 elections rigged, then he has to resign, and call fresh elections," said Khan, whose party came second in the general elections.

Khan's call for the formation of a commission marks a softening in his anti-Sharif stance as the former cricketer had previously conditioned his support for a probe on prime minister's resignation.

Many see the shift in Khan's stance as a sign of isolation in the national politics after Khan's key ally -- the firebrand preacher Tahir-ul-Qadri -- abruptly ended his own protest last month and left the country. Also, Khan's call for fresh elections and Sharif's resignation could not even convince all major opposition parties.

Khan had set off his long march on capital Islamabad on August 14, and teamed up with Qadri next day in front of the parliament.

The marchers anger soon exploded into violence that saw capture of state-owned television station for hours, and storming of the parliament. Five protesters were killed, and over 500, including 100 police officers were injured in clashes between the two sides.

Khan's Pakistan Tehreek-e-Insaf has 33 seats in the 342-member National Assembly. He has already threatened to gather "people from across Pakistan" in Islamabad on November 30 "to oust the government" if his demands were not met.

Qadri, who returned from Canada in December 2012 after a six-year self-exile, reportedly ditched Khan for a 'handsome' deal with the government. He, however, denies any deal with Sharif's government.