Pakistan's biggest floods in 80 years threaten to inflict widespread suffering in Sindh Province as millions of people were ravaged in the disaster in other parts of the country. 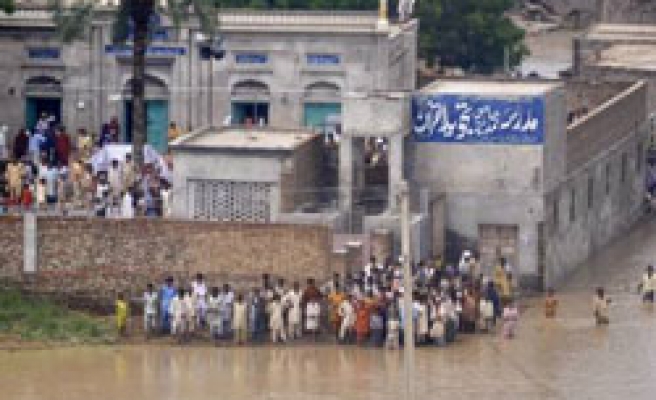 Pakistan's biggest floods in 80 years threaten to inflict widespread suffering in Sindh Province as millions of people were ravaged in the disaster in other parts of the country.

Raging waters have spread from the northwest to the Punjab agricultural heartland and then down to the southern province of Sindh, as Pakistanis watched villages collapse, thousands of people drown, and their president leave for state visits abroad at the height of the disaster. Officials in Sindh, home to Pakistan's biggest city and commercial hub Karachi, are scrambling to prevent heavy loss of life and more destruction to the mainstay agriculture industry.

Rural areas are expected to be hit hardest.

"There is nothing but just water all around us," said a Reuters cameraman travelling on a boat with army troops just southeast of the town of Sukkur, where houses once stood.

"I haven't seen anything after travelling several miles in the flooded areas along river banks."

About 350,000 people have been evacuated from low-lying areas of the Indus river basin in Sindh.

The floods brought on by monsoon rains have devastated more than 3 million people, killed more than 1,500 and reinforced the view that civilian governments, perceived as corrupt and weak, are unable to handle major crises, leaving the army to step in.

The plight of people in Punjab may indicate what kind of troubles could be in store for Sindh.

"My father is still trapped in his house. My whole village has been inundated. I just don't know what to do," said Abid Hussain, a labourer, in a town in southern Punjab.

Determining the overall costs of the floods may not be possible anytime soon, as authorities surveying vast areas where raging waters have swallowed up entire villages.

The Punjab Relief and Crisis Management Department said more than 1,300 villages were affected and more than 25,000 houses destroyed. Sixteen people had been killed in the province.

"It is very possible as the disaster progresses to the south, that it may become worse," said Maurizio Giuliano, spokesman for the U.N. Office for the Coordination of Humanitarian Affairs.

"There is a risk that a dam will break... as a humanitarian (organisation) we are getting ready to cater for any type of scenario, including a disaster."

Authorities in Sindh said treacherous conditions were hampering their evacuation efforts, but added that villagers were reluctant to leave their homes.

"If you tell them a big water-surge is on the way, they reply, 'Go and take care of our cities, don't worry about us. We are excellent swimmers'," a senior district government official in Sukkur, Inamullah Harejo, told Reuters by telephone.

Pakistani troops evacuated most of the people from a village near the town of Sukkur. But about 25 people refused to leave, clinging to their houses and belongings.

Many Pakistanis complained that state authorities failed to warn them that raging waters were headed their way.