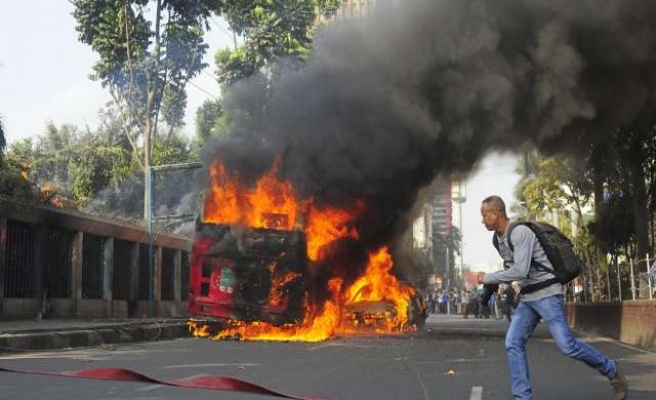 World Bulletin / News Desk
After more than a month of political violence that has killed scores of people in Bangladesh, the country's prime minister told parliament there will be no compromise with the opposition.

An opposition-enforced nationwide transport blockade, coupled with a series of nationwide and regional shutdowns, has seen at least 80 people killed, mainly in petrol bomb attacks on vehicles defying the blockade.

"We will resist the devils and Inshallah we will be able to restore peace again in the society," said Prime Minister Sheikh Hasina, according to state news agency Bangladesh Sangbad Sangstha. "Are they human being or devil, who are burning people without any reason and what kind of politics it is?"

The opposition Bangladesh Nationalist Party, blamed for the petrol bombings, are believed to be using their program of street unrest to unsettle the Bangladesh government. The violence began on Jan 5., on the first anniversary of controversial general elections, when the opposition were prevented from holding protests in the capital, Dhaka.

Civil society and foreign diplomats have increasingly called on Bangladesh's political parties to engage in a peace dialogue but both sides have resisted talks.

The opposition claim that the government has conducted mass arrests of their supporters and even killed many of its activists.

According to the local daily Prothom Alo, there have been at least 19 opposition figures who have died in incidents where police claimed the victims were caught in "crossfire."

In one incident in Dhaka, 25-year-old Jasim Uddin was arrested on Saturday and then killed in "crossfire" on Sunday.

"He was arrested due to taking part in an arson attack and hurling bomb at a police officer Golam Moula on Saturday," said the Deputy Commissioner of Dhaka Metropolitan Police Masudur Rahman. "When he was taken to find his companions in city’s Agargaon area, they shot at police and after the gunfight we found his dead body."

Earlier, Dhaka's Deputy Inspector General of Police SM Mahfuzul Haq Nuruzzaman gave a clear instruction to policemen in the Gazipur area to "do whatever is necessary to do" to ensure public security.

“I’m asking you to do whatever possible to catch those who kill people and destroy properties," said Nuruzzaman. “I’ll take full responsibility for any eventualities.”

In a statement released by Human Rights Watch on Feb. 6, the watchdog criticized the use of petrol bomb attacks -- which disproportionately affect the country's poorest, who have to travel to work despite the blockade -- but also called on the government to avoid "arbitrary use of force, arrests, and disappearances."

The organization’s Asia Director Brad Adams said: "All parties should cooperate to stop the cycle of violent crimes and ensure those responsible for all crimes are arrested and prosecuted."

"The violent crimes being committed by some members of the opposition cannot justify killings, injuries, and wrongful arrests by the government," he said. “Bangladesh has a long history of permitting security forces to commit excesses in order to control crime, and it is leading to the collapse of rule of law and blood on the streets.”

The U.S. and U.N. have also, on several occasions, expressed concerns over the violence in Bangladesh.

"We have called on all parties to instruct their members to refrain from violence, and also on the government to provide the necessary space for peaceful political activity," said Harf.

Bangladeshi businessmen staged a protest this week, calling for an end to shutdowns, because of the impact the unrest has had on the economy. Opposition-led shutdowns, known as hartals, would have extended through two working weeks by Friday.