Philippine authorities defended their handling of a bus hostage crisis in which eight Hong Kong tourists were killed. 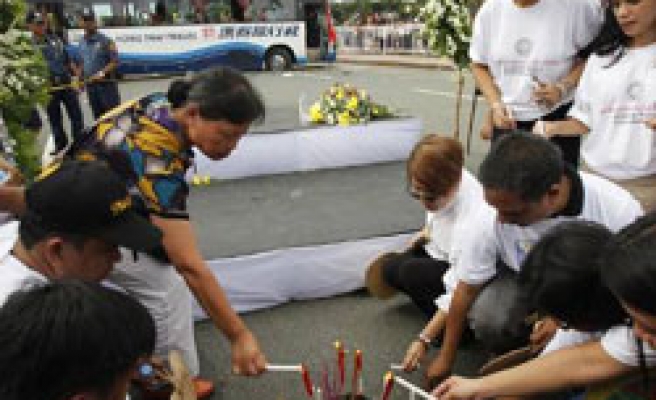 Philippine authorities defended on Tuesday their handling of a bus hostage crisis in which eight Hong Kong tourists were killed.

Eight hostages and their disgruntled ex-policemen kidnapper were killed at the end of a day-long siege in the capital after signs earlier that the crisis would be resolved peacefully.

Hong Kong advised residents against travel to the Philippines, a blow to the poor Southeast Asian nation's hopes to double tourist numbers to six million a year to help lift economic growth.

In China, the widely-read tabloid the Global Times, run by Communist Party mouthpiece the People's Daily, said the botched rescue reflected a deeper malaise in the country.

"The Philippines is one of the most chaotic countries in Southeast Asia," the newspaper said.

"A culture of colonisation, autocracy and rapid changes in government have created all sorts of curious grievances in this country," it added.

Philippine President Benigno Aquino III admitted there were deficiencies in the operation, but said the gunman's access to TV and radio made it hard for police to launch a rescue mission on a bus that was parked some distance from cover.

The day-long siege in downtown Manila had a lengthy climax, with police launching an initial assault on the bus in heavy rain before moving in a second time and killing the gunman an hour later.

"Another aspect that I think not too many people are aware was that at some point in time, when the action did occur, the hostage taker had surrounded himself with his hostages," Aquino he told a midnight news conference.

"He used them as body shields which made our forces hesitate to employ deadly force."

Authorities had taken heart from the release during the day of nine hostages by 55-year-old Rolando Mendoza, a disgruntled ex policeman angry at being sacked from the force.

Aquino said Mendoza had not seemed to be a hard-core criminal or terrorist and "that led us to believe that this could be settled peacefully, without loss of life".

"We will be enhancing and providing funds to support the training and acquire equipment that seemed to be so lacking," said Aquino, who took office less than two months ago amid widespread expectations he could restore the Philippines' reputation.

"There was a television set inside the bus. Unfortunately, Mendoza got a glimpse of what the police were up to. So we lost our element of surprise," Interior Secretary Jesse Robredo told dwIZ radio.

it is appauling that phillipines authority turned a blind eye on what the rest of the world could see. on the incompetent handling of the situation. how can one be light hearted simply because the hostage taker appeared to be friendly? unable to anticipate the riskiness of the situation reflect the incompetency of the leaders. and they are overplaying the media's card. at this digital age, that should be expected.