Philippine police says may have shot some bus hostages

The Philippines acknowledged for the first time that some of the hostages killed during a botched bus hijack rescue operation may have been shot by police. 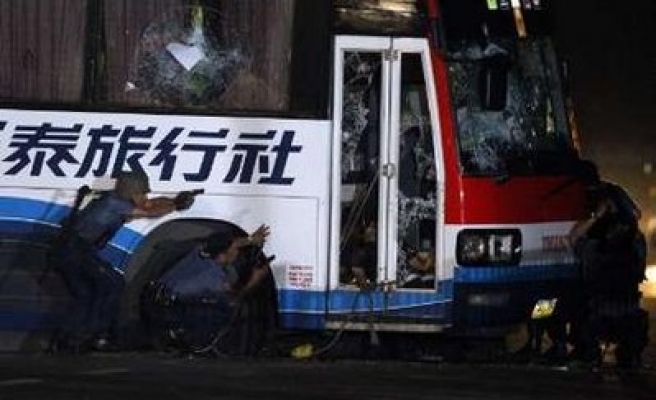 The Philippines acknowledged for the first time on Thursday that some of the hostages killed during a botched bus hijack rescue operation in Manila last month may have been shot by police.

Eight Hong Kong tourists died when police commandos stormed the bus and killed the hijacker, a disgruntled former police captain, prompting criticism from China and elsewhere that the Philippine force was ill-equipped to handle hostage situations.

Based on forensic reports, most of the hostages were not shot at close range and dozens of gunshots were fired from outside the bus, Justice Secretary Leila de Lima told reporters on Thursday.

Police officials had said snipers positioned to target the hostage-taker, who was seeking to be reinstated in the force, were the only ones who fired at the bus. The bus driver had also testified that the hostages were shot at close range.

"From what we see from the results of the bullet trajectory examination, there were certain shots that came from afar, not all came from the snipers because we know where the snipers were," de Lima said.

De Lima, who sits on a panel reviewing the hostage rescue operation, said blood would have splattered all over the seats and windows of the bus if the hostages were shot at close range. Dried blood was found only on the seats and floor of the bus.

In a chat with local television anchors aired live on Thursday, President Benigno Aquino said his government had begun efforts to improve police capability to handle similar hostage crises in the future.

"Our government is now focused on taking the necessary steps to prevent this tragedy from happening again," Aquino said. "We are also examining our internal processes and crisis management protocols to see how they can be improved."

Aquino came under heavy criticism for his handling of the bus hijacking on Aug. 23, casting doubts on his ability to deliver promises of enforcing the law and improving security.