Nearly 13,000 houses were crushed and more than 22,300 damaged on the eastern island of Samar, where Typhoon Hagupit made landfall 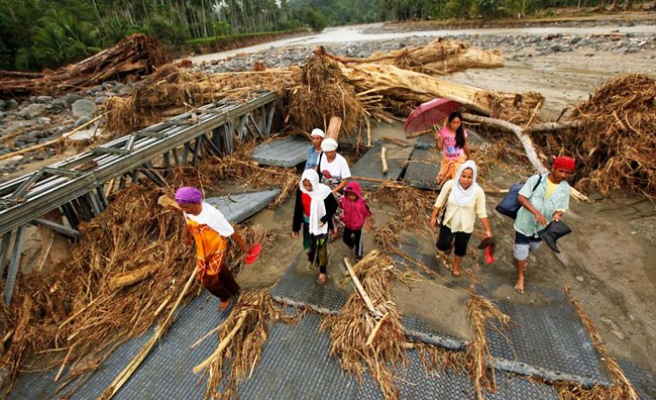 Philippine emergency workers were struggling on Tuesday to reach coastal villages on an island hardest hit by a typhoon where thousands of homes have been wrecked by powerful winds and a storm surge rising three to four metres (10 to 13 feet).

Nearly 13,000 houses were crushed and more than 22,300 damaged on the eastern island of Samar, where Typhoon Hagupit made landfall on Saturday and made slow progress across the country, officials said.

The Philippine weather bureau lifted all storm alerts after Hagupit, one of several typhoons to hit the tropical archipelago each year, was downgraded to a tropical depression and headed west towards Vietnam.

Roofs were ripped from houses, wooden huts were reduced to matchwood and coconut trees torn up by the roots. Most of the victims, on Samar island, were washed away in floods and some hit by fallen trees, the Philippine Red Cross said.

Red Cross chairman Richard Gordon told Reuters the agency received reports that 35 people died but it can only confirm 22 deaths. The official government death toll has risen to eight.

"Access is very difficult. There are landslides, some are one-lane roads. In the inner barangays (villages), many of the roads have been washed out by flash floods," Gordon said.

"...It's a long trek (to the villages), it's like Yolanda all over again," Gordon said, referring to super typhoon Haiyan, which hit the same area of the central Philippines last year.

But the damage was nowhere near that wrought by Haiyan, which destroyed or damaged more than a million homes, although farm damage from Hagupit, mostly to rice crops, was initially estimated at 1.3 billion pesos ($29.17 million).

Learning lessons from Haiyan, which left more than 7,000 dead or missing, authorities launched a massive evacuation effort days ahead of the storm, emptying whole towns and villages.

Bank employee Arnalyn Bula told Reuters how howling winds had pounded the walls of her aunt's two-storey concrete home in Dolores in Eastern Samar, where her family sought shelter.

"Our kitchen was wrecked. Around us, our neighbours' homes were flattened like folded paper," said Bula, 27.

Some residents in Dolores hung signs that read "help us" as they appealed for food, water and shelter.

"We were inside an evacuation site when the roof caved in," a woman told local radio. "God saved us. There were no casualties. There will still be Christmas for us."

President Benigno Aquino changed his mind and will travel to Busan on Thursday to attend the annual summit of Southeast Asian countries and South Korea. Earlier, he said he was skipping the event to focus attention on the typhoon clean-up.

The National Grid Corp said nearly two million homes across the central Philippines and the south of the main island of Luzon were still without power.

Thousands of people emerged from shelters to fix wrecked homes and clean up debris, including fallen trees and power poles. Aid trucks were reaching some of the hardest-hit areas after soldiers reopened roads.