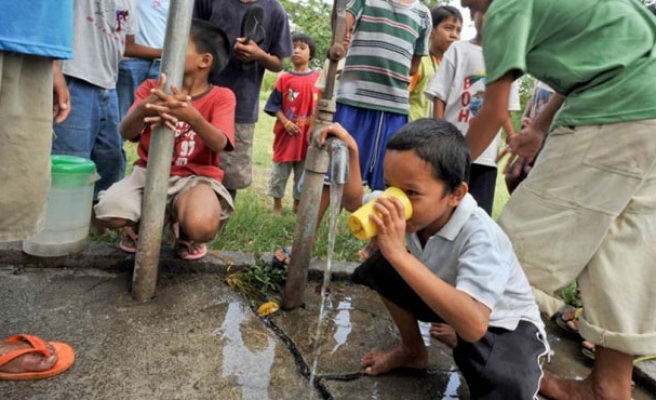 A town in the Philippines’ Muslim south has been suffering from a water outage for four days since suspected al-Qaeda-linked gunmen blew up pipes in Basilan province – a known Abu Sayyaf stronghold.

Pictures emailed to Anadolu Agency from local radio stations showed people lining the streets of Maluso as they waited for fire trucks to fill their empty containers, while others gathered at residential areas with traditional watering holes or deep wells.

Isabela City-based DXNO radio reported on the “water crisis” Monday, citing the management of the Maluso Water District as saying the outage was caused by damage from explosives planted by the Abu Sayyaf last week.

Maluso Mayor Indanan Daud has remained mum on the reported involvement of the group, and could not be reached for comment.

A crisis committee from the provincial government, however, was set to visit Maluso to assess the damage.

A militiaman was beheaded and his colleague wounded Saturday while they were patrolling the outskirts of Maluso to secure the town’s water connection, according to police.

Soldiers and other militiamen had caught up with the suspected Abu Sayyaf gunmen and engaged them in a firefight in Mahayahay village, reportedly injuring two militants.

As a result of the clash, more than 20 families fled to the town center of Maluso, where they have been staying at evacuation centers.

Meanwhile, security forces are tracking down Abu Sayyaf members who escaped a recent military raid on a bomb-making hideout in Basilan and are believed to have fled to Zamboanga, a predominantly Christian city north of the island province.

“So, that’s the reason why U2 [intelligence branch] officials went to our office and gave us pictures and possible location of these IED carriers,” Casimiro said. “We continue to run after them because we are not sure how many IEDs were actually slipped out of Basilan.”