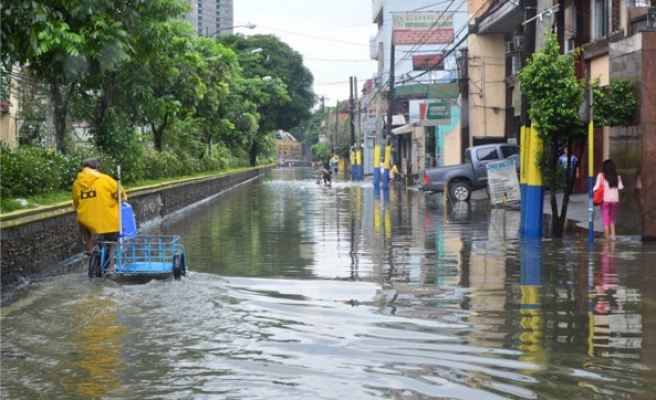 The Philippines began a massive clean-up on Thursday after floods swept the capital and nearby provinces, forcing residents to wade through shoulder-deep waters in some places after nearly two weeks of monsoon rains killed 91 people.

Power, water and communications services were restored as floodwaters started to recede, allowing many to return home to fix their houses. Nearly 300,000 people remained in temporary shelters, disaster officials said.

"It's getting better in the capital region," Susana Cruz, regional head of the civil defence office, told reporters.

The monsoon rains, which dumped about 300 mm (12 inches), or three times the daily average, from late Monday to Tuesday, were the heaviest in three years, the weather bureau said, as a typhoon lashed east China where hundreds of thousands of people had been evacuated in advance.

The bureau has lifted rainfall alerts, forecasting light to intermittent showers for the next 12-24 hours. By mid-day, the sun was up for the first time in weeks.

Outside Manila, home to 12 million people, many of them living in slum conditions, wide areas of the rice-producing plains of the northern Luzon island remained under waist-to-neck-deep water, forcing residents to move around in canoes and on makeshift rafts.

Enterprising villagers were building small boats to make a living. "We'll have nothing to eat if I don't work," Eduardo Ortega said, as he transported people across flooded areas.

Six provinces near Manila were placed under a state of calamity, including the key rice-growing provinces of Bataan, Bulacan and Pampanga.

The farm department estimates the damage so far to crops, mainly rice, at 167.9 million pesos ($4.02 million).