Duterte, whose narcotics crackdown has killed thousands of people and drawn international criticism, said he would appoint congressman and former university law professor Harry Roque as his spokesman. 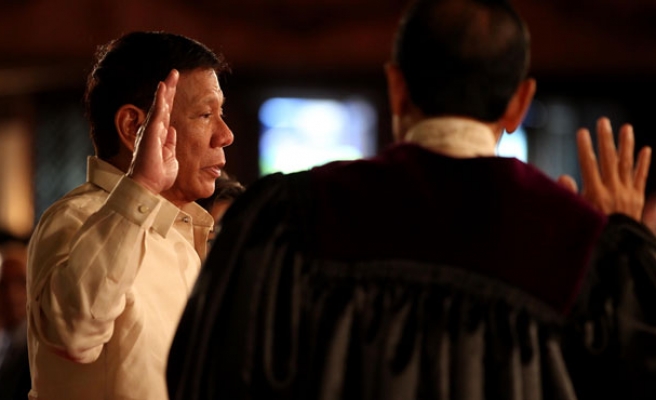 A tough-talking ex-human rights lawyer has been named Philippine President Rodrigo Duterte's new spokesman, replacing a former pastor who had been one of the most vocal defenders of his deadly drug war.

Roque takes the place of Ernesto Abella, who has often downplayed Duterte's profanity-laced speeches and controversial remarks as "rhetoric" or "hyperbole" and has tempered the president's pronouncements.

Duterte did not give a reason for replacing Abella, but said Roque was the right person for the job.

"To get your message clear, I said Harry would fit the (post) because we both have naughty mouths," the president said during Roque's birthday celebration on Friday night.

The announcement came weeks after the president suffered his first major drop in popularity, according to an independent pollster, following the deaths of two Manila teenagers in his anti-crime crackdown.

However subsequent surveys by other polling agencies found that Duterte and his drug war remained largely popular.

Duterte, 72, won elections last year after campaigning on a law-and-order platform and since then police have reported killing more than 3,900 "drug personalities".

Another 2,290 people have died in unsolved "drug-related" killings, government data show, leading rights groups to warn of a crime against humanity.

Roque had acted in various high-profile cases, defending families of victims of the nation's worst political massacre and journalists sued for defamation, before representing farmers and other poor citizens in the lower house.

"To be the communications czar of Duterte, one has to be an expert mortician undertaking the post-mortem embellishment of the President's crude and unfounded pronouncements," said congressman Edcel Lagman.

Duterte this month threatened to expel European envoys as he accused their governments of plotting to have Manila "excluded" from the United Nations, without citing evidence.

Roque's predecessor Abella later said no such orders were made.

Abella, described by local media as "mild mannered", advised journalists last year to use their "creative imagination" to interpret Duterte's remarks on wanting to cut ties with the United States, a defence treaty ally.

He also said last year that Duterte's remarks about wanting to rape a murdered Australian missionary were "a very rough kind of humour".