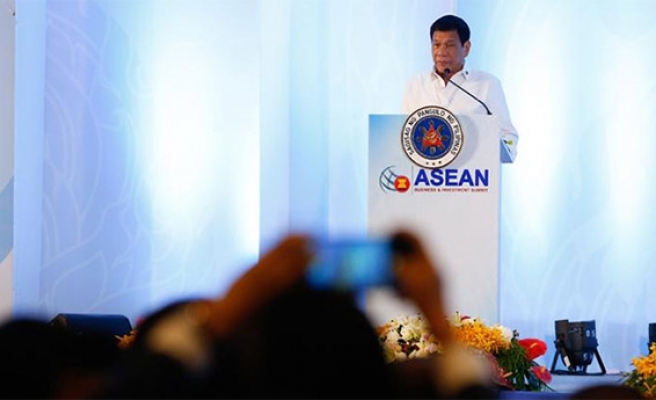 President Rodrigo Duterte has raised P3 million Philippine peso as bounty for all police officers involved in the illegal drug trade.
Since an initial P2 million was first offered by the president last year, many policemen have been accused of committing various crimes under the guise of legitimate operations.
"No scalawag has yet fallen," Duterte said in a televised speech before civil servants in Malacañang on Wednesday, expressing dissatisfaction over efforts to go after police officers involved in the drug trade.
"I’m offering P3 million per head. I will see, that will go up more, so that we will get rid of you,” he said in English and Tagalog.
In August 2016, Duterte offered the bounty to those who could give information that would lead to the capture of “ninja cops,” or policemen dead or alive.
"Ninja” cops are those who re-sell illegal drugs seized in police operations and protect drug syndicates while still active in service.
The soft treatment of the President with the police forces despite their being accused of committing various crimes has drawn criticisms from different groups.
According to media reports, opposition politicians have said that the police force has become even more abusive under Duterte, who vowed to protect law enforcement authorities from criminal prosecution.
Following recent teen deaths involving police officers, Duterte reminded law enforcers that unlawful killings were not allowed and asserted that he would not condone police abuses.
Duterte launched a bloody war on drugs when he took office last year that has left more than 9,000 Filipinos dead in the largest loss of civilian lives in the country's anti-drug campaing history.
Human rights groups say the crackdown could amount to a crime against humanity while it has been condemned by the United Nations, and other Western countries.
In the same event on Wednesday in Malacañang, President Duterte said even his son Davao City Vice Mayor Paolo Duterte would not be spared from death if he gets involved in illegal drugs.
He issued the statement amid controversy over his son's alleged involvement in the entry of a P6.4 billion shabu or a methamphetamine shipment from China.
"My orders are to kill you ( Duterte son Paolo) if you are caught and I will protect the police who kill you," Philstar quoted Duterte as telling his son in the speech.
Last Mod: 21 Eylül 2017, 09:44
Add Comment