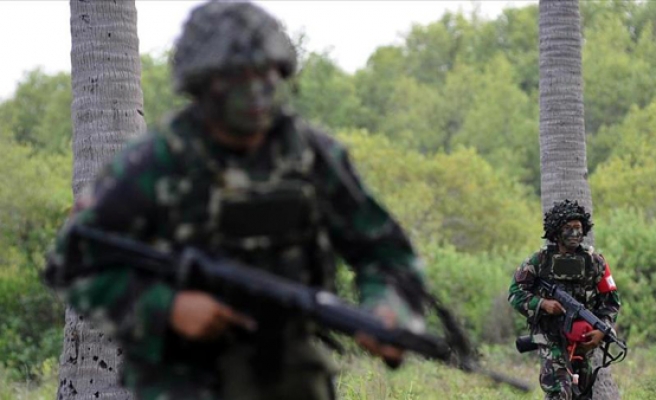 A disagreement has broken out between a splinter group of the country's one-time largest Muslim rebel front and the Philippines’ military over accusations that the army is responsible for a show of force by what appears to be an armed Christian militia in the country's south.

In a Friday report by Inquirer.net, Abu Misri Mama -- a spokesperson for the Bangsamoro Islamic Freedom Fighters (BIFF) -- claimed that photos he had seen had led him to believe that firearms a new group calling itself "Red God Soldiers" have been brandishing in pictures came from the military.
A military spokesperson, however, shrugged off the allegation Friday, saying that it would not think twice about taking action against the Christian militia if it could determine their location.

Capt. Jo-ann Petinglay, spokesperson for the military’s 6th Division based in Maguindanao, told defense reporters if they learn where the group is, they will be subject to law and arrested.

Earlier Friday, GMA News reported Bishop Angelito Lampon of the Vicariate of Jolo, Sulu’s provincial capital, as saying that Christians in the majority Muslim south have begun taking up arms and formed the militant organization in southern Mindanao island out of “frustration and fear” amid attacks by extremist Muslim groups.

Philippine security officials, however, have downplayed the claim saying it may be a ploy to seek financial help.

Lampon said some members of the minority community were feeling increasingly "desperate" in the region.

He described the formation of the "Red God Soldiers" as a "desperate attempt by these Christians who are being attacked now and then by these armed groups".

On Wednesday, the Catholic Bishop's Conference of the Philippines website reported that around 300 members of the supposed militia gathered Tuesday to display weapons and pledge to "drive Moro [indigenous Muslim] renegades from their communities".

For years, the violent Al Qaeda-linked Abu Sayyaf has also operated in Mindanao, with a stronghold in Sulu. In Aug. 2014, video clips uploaded to YouTube appeared to show guerrillas -- including those from the Abu Sayyaf -- pledging support to ISIL.

Petinglay stated Friday that only legitimate armed forces are allowed to carry guns.
"If there are personalities from our ranks behind them, we will investigate. We will not tolerate this and we will file appropriate charges against them," she said.

Mama underlined, however, that BIFF was not afraid of the group despite the sophisticated weapons they appeared to possess.