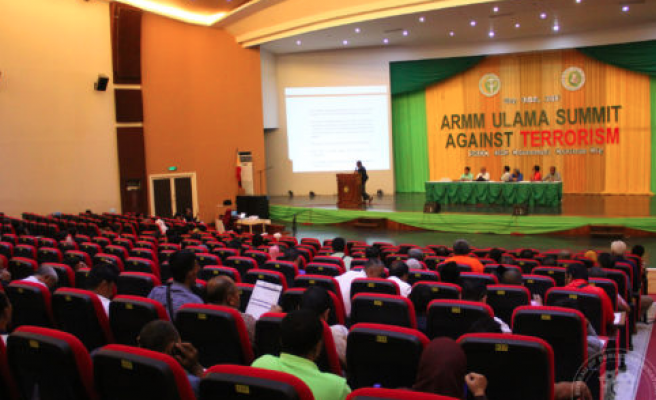 Muslim scholars gathered Saturday, in the predominantly Christian city, Zamboanga, for a two-day summit against violent extremism and terrorism.

“Our aim here is to spread the true teachings of Islam. We are mobilizing the ulama to counter the threat of violent extremism,” said Governor Mujiv Hataman of the Autonomous Region in Muslim Mindanao (ARMM).

There is a need for more counterterrorism strategy to fight extremist ideologies, Hataman explained to the Ulama from the provinces of Zamboanga, Basilan, Sulu, and Tawi-Tawi in the south during a press conference.

"That's why we are holding these summits because this is already a fight of narratives as they have (Abu Sayyaf and Maute groups) narratives, narrations that we should counter," he said.

Part of the two-day summit was for ulama-participants to set guidelines and norms that will prevent misinterpretation of Islamic teachings by young militant Muslims to make people believe in their manner of enforcing religious tenets.

Summit participants were also asked to “craft plans and approaches on how to deal with violent extremism issues, develop ‘Risalatul Wasatan’ or call on moderation in teaching about Islam, and clear misconceptions on the negative labeling of Muslims in general,” Hataman said.

"I am very confident that what we do is right," Hataman said, referring to the narratives of Ulama. He explained that the summits they have been holding are directions to counter the narrations being indoctrinated into the minds of people by terrorists in the Muslim community."

The only difference, Hataman said the extremists are getting aggressive, and "we're not, as there is no solidarity among different sectors who are against terrorism."

In fact, he said the terroristic acts of the Abu Sayyaf and Maute groups wouldn't have happened if we had "a whole of nation approach," where the Ulama will oftenly go to Madrasas and Mosques to invite and make sermons to fear God.

"These terrorists have already hijacked the Islamic faith (of Muslims) and promoted the wrong. What if the narrations (of Abu Sayyaf and Maute groups) are perpetual? It's a pity thing on the part of Muslims. I'm afrad of a future when all Muslims become terrorists."

The summit last Friday and Saturday was an offshoot of the Ulama Summit held in Cotabato City last May, which was initiated by the regional government of the ARMM, the regional Darul Ifta, and Majlish-Shura.

As early as 2015, the Darul Ifta of the ARMM declared that “terrorism and mischief cannot be accepted as synonyms for Jihad, or one of struggle’s methods, because our religion commands us to be compassionate to all beings in the land.”

The Ulama earlier condemned the brazen attack of the Maute and Abu Sayyaf in the city of Marawi. The fighting, which started days before the Muslim holy month of Ramadan on May 23, has been ongoing for more than five months.

The objectives of the solidarity summit was to bring together the Ulama in the region for mutual consultation and for discussions on the pressing issue of violent extremism and terrorism as well as reach a consensus on how to protect the Muslim community in general and determine the Ulama’s (religious professionals) role in countering and preventing violent extremism in the locality.

Part of the two-day summit was for the Ulama to set guidelines to reach a common understanding on terminologies about Islam that would prevent misinterpretation.