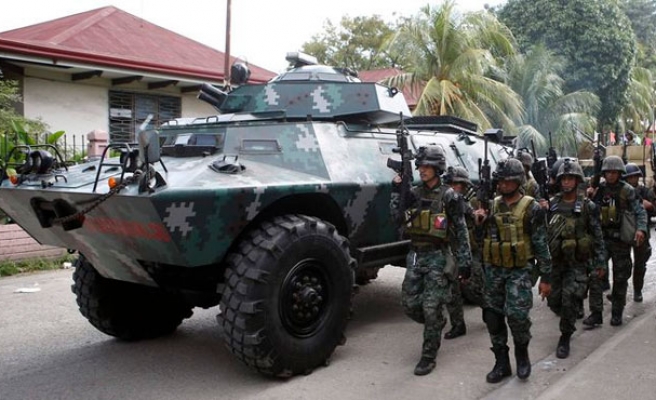 The Philippines’ march towards peace in its restive south was put on hold Monday following a battle between police and armed groups that left at least 50 police dead.

Senator Ferdinand Marcos Jr, chairman of the Senate committee on local government, said he was halting discussions on the Bangsamoro Basic Law until further notice.

In a statement released Monday, he said: ''I decided to suspend indefinitely all discussions and hearings related to the passage of the Bangsamoro Basic Law until this is clarified.

''We cannot in conscience proceed with these hearings while a cloud of serious doubt hangs over the security situation in the south. A peace agreement cannot be legislated under the threat of such extreme violence. Violence has no room in a civilized society.''

His comments came as police told local media that 50 elite police Special Action Force commandos were killed in Sunday’s fighting in Maguindanao, a province on the southern island of Mindanao. The fighting involved members of the Moro Islamic Liberation Front, who signed a peace deal in March to end a decades-long insurgency and establish a new autonomous Muslim region.

The group’s Vice Chairman for Political Affairs Ghadzali Jaafar said delaying the passage of the law would be "a disadvantage to all parties concerned."

The Bangsamoro Basic Law is at the heart of the peace agreement and is due to establish an autonomous Muslim region in the southwest of the majority-Catholic Philippines.

Miriam Coronel-Ferrer, chairwoman of the government peace panel, said efforts were being made to recover the bodies and secure the extraction of police still in the area.

In a statement to The Anadolu Agency, she said: "As soon as our cease-fire teams learned of the hostilities, they immediately effected a cease-fire.  We regret, however, that due to the involvement of other armed groups, some intermittent fighting continued.

"Our aim is to normalize the situation as soon as possible in order to prevent the displacement of civilians and give full swing to the humanitarian effort."

Police commandos from Manila swooped on the area to arrest Malaysian Zulkifli bin Hir, an alleged bomb-maker belonging to Jemaah Islamiyah, the Southeast Asian group linked to al-Qaeda. He is thought to have ties to the Abu Sayyaf, an al-Qaeda-linked militant group operating in the south.

Bin Hir, known as Marwan, has long been sought by law enforcement and has a $5 million FBI bounty on his head. He was arrested in Sunday’s operation, Police Senior Superintendent Noel Armilla told the GMA News network Monday.

Von Al Haq, the MILF’s military chief, told the Philippine Daily Inquirer the police were also after Basit Usman, understood to be a Jemaah Islamiyah bomb-maker trained in Afghanistan.

Aid groups warned the battle could spark a humanitarian crisis as thousands of civilians flee the area fearing more clashes.

"This is a big blow to the Mindanao peace process and shows the utter lack of sincerity of the [Benigno] Aquino government towards peace, Norma Binas, secretary general of the International League of Peoples' Struggle, said in a statement.

The police casualties are the most significant suffered by government forces since the 2013 siege of Zamboanga City by the Moro National Liberation Front, when 33 security personnel were among 169 people killed.

The conflict has left more than 150,000 people dead and further restricted development in the country's poorest region.