The Philippines released a marine colonel detained in 2006 on charges of leading a coup attempt against former president Glorial Arroyo. 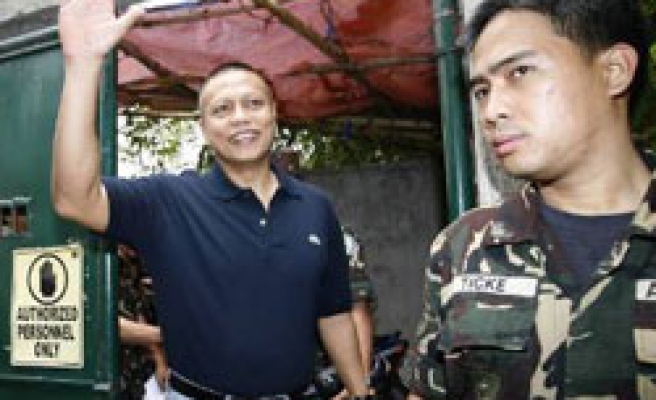 The Philippines on Wednesday released a marine colonel detained in 2006 on charges of leading a coup attempt against former president Gloria Macapagal Arroyo, but his trial for mutiny continues.

Brigadier-General Jose Mabanta, a military spokesman, said Ariel Querubin was released on condition he reports to a senior officer while he awaits trial at a military court, attends his hearings and does not leave the country.

"He is given liberty to leave detention effective today," Mabanta told reporters.

Querubin's court sessions have been irregular over the years, depending on the availability of the military tribunal. The trial will resume on Aug. 27.

Querubin, a recipient of the military's highest medal for combat, unsuccessfully ran for a seat at the upper house of Congress in May's elections while in detention. Standing for election meant he was considered to have automatically resigned from the military.

"Let's be clear about it, this is not my initiative," Querubin told reporters as he walked out from detention at the main army base in Manila, where his family, lawyer and friends were waiting for him.

In 2006, the military accused Querubin and two generals of plotting a coup in February of the same year under the cover of a demonstration by left-wing activists and civil society groups demanding Arroyo's resignation over corruption and election fraud allegations.

Court records showed Querubin and Brigadier-General Danilo Lim went to then chief of staff General Generoso Senga to try to convince him to withdraw support from Arroyo and join the mutiny over alleged fraud at the 2004 presidential election.

Documents seized from some of the coup plotters showed they planned to impose martial law, abolish the courts and legislature and set up a civilian-military junta.

Generals loyal to Arroyo acted swiftly, arresting the coup leaders and stopping movement of troops from the provinces.

Lim, who was also accused of leading another coup attempt against Arroyo as well as taking part in an attempt to overthrow President Corazon Aquino, was released from detention in late May.

Arroyo, who stepped down on June 30 after 9-½ years in office, survived three attempts by rogue troops to grab power. She also saw off five impeachment motions in Congress.