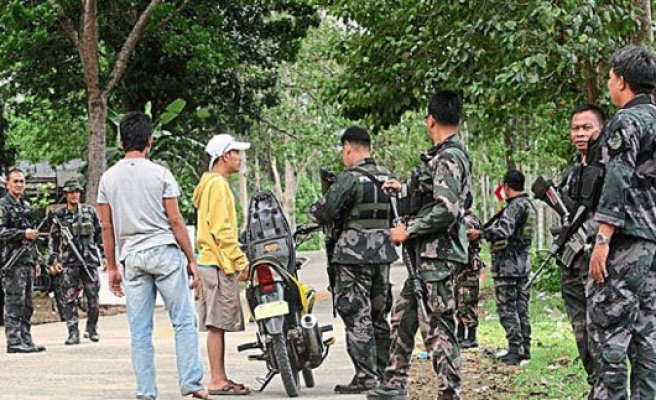 A notorious leader of an al-Qaeda-linked militant group was killed alongside a follower in a firefight in the Philippines’ Muslim south that left three soldiers wounded, according to the military Sunday.

The commander of Basilan province’s Joint Task Group said in a press release that the Abu Sayyaf’s Abdulhasan Yusop Tanajalun -- also known as "Bullet" -- and a certain Halid Calbie died at around 4 a.m. (2000GMT Saturday) in Tuburan town.

"Unfortunately, the AFP [Armed Forces of the Philippines] has risked their lives by suffering three wounded personnel but was able to pre-empt the planned IED bombings in Lamitan City which can inflict civilian casualties and damage to properties," Col. Rolando Joselito Bautista said.

Tanajalun, tagged by authorities as the leader of the Urban Terrorist Group locally known as Anak Yatim (Orphans of Abu Sayyaf Group martyrs), had existing warrants of arrest on charges of kidnapping and serious illegal detention with ransom.

According to the military, the slain Abu Sayyaf leader had also been involved in a series of killings of police and military personnel, businesspeople and foreign nationals.

His group is also accused of engaging in extortion with threats of bombing and the kidnapping of three employees of a construction firm in Akbar town last January.

Bautista said the group’s “persistent” illegal activities and involvement in killings had forced locals of Lower Sinangkapan village and Tanajalun’s relatives to provide reliable information regarding his whereabouts.

"Immediately, the organized inter-agency task group conducted a pursuit operation with the support of the local government unit of Tuburan town to track down the perpetrator until he was pinned down in Lower Sinangkapan, Tuburan," he added.

The 30-minute clash reportedly began when security forces seeking to arrest Tanajalun were fired on by undetermined gunmen.

Tanajalun’s body was brought to the task group’s Command Post in Lamitan for identification before being turned over to his family for Islamic burial rites.

Police are also investigating the involvement of Tanajalun in the 2014 kidnapping of a Filipino cosmetics dealer in predominantly Christian Zamboanga City as his group reportedly received P5 million ($106,000) for the hostage’s safe release.

The Abu Sayyaf -- armed with mostly improvised explosive devices, mortars and automatic rifles -- has carried out bombings, kidnappings, assassinations and extortion in a self-determined fight for an independent Muslim province in the Philippines.