The new Philippine government wants to move witnesses to the massacre of 57 people to protect them after a confrontation in the Manila detention facility where they are being held with others accused in the case. 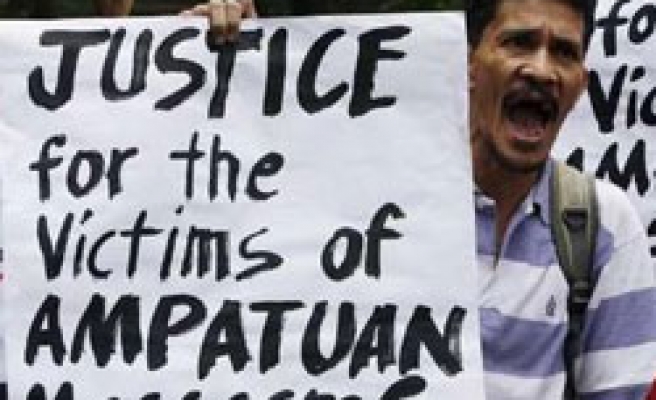 The new Philippine government wants to move witnesses to the massacre of 57 people to protect them after a confrontation in the Manila detention facility where they are being held with others accused in the case.

Justice Secretary Leila de Lima said some police officers, who were among the 197 charged with taking part in the murders but had agreed to testify against the key suspects, members of the powerful Ampatuan clan, were worried over their safety.

"Our main job is to provide protection to our witnesses from any threats and harm," de Lima told reporters, saying there had been a near-violent confrontation between the witnesses and Ampatuan loyalists inside the detention facility at the weekend.

"We've asked the interior secretary to order jail authorities to separate our state witnesses from the rest of the suspects to insulate them from threats, intimidations and even bribery attempts."

In June, a witness in the case was shot dead. Earlier this month, de Lima ordered prosecutors to charge two people for attempting to bribe two witnesses to retract their testimony against the Ampatuans.

De Lima said the department had petitioned the high court to move the state witnesses to another detention facility while a local court considered motions to dismiss the cases and disqualify the judge hearing the massacre case.

The trial of the main suspect, Andal Ampatuan Jr, has been suspended since February. Since then, murder charges have been brought against Ampatuan's father, uncle and three brothers, as well as 191 others, but their trials have not started.

The suspects are being held at a police base in Manila. More than 100 of 197 accused are still at large, including 20 members of Ampatuan clan.