The House Speaker for Mindanao has said that he has given up all hope for any law to bring closure to the peace process in the south of the Philippines. 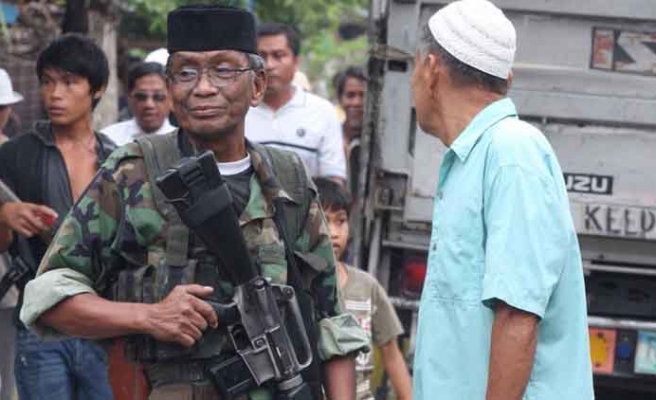 With just three days left before Congress adjourns for election campaigning, a law seeking to create an autonomous political entity in the Philippines south and bring closure to a 17-year peace process between the government and the country's one time largest Muslim rebel group is still to be ratified.

This week, Muslim lawmakers expressed little hope that Bangsamoro Basic Law will pass through the Senate and the House of Representatives before new leaders -- and with them, a new political outlook -- are sworn in on the back of May's vote, raising the chances that large-scale conflict could return to the country’s mineral-rich -- but impoverished -- southern region.

In a statement emailed to Anadolu Agency, Lanao del Sur District Representative Pangalian Balindong expressed severe disappointment that the House has so far failed to pass the law on its second reading.

"It is the lowest and saddest day of my legislative work," said Balindong, who is also deputy house leader for the predominantly Muslim region of Mindanao.

"Today, with a heavy heart and a sense of foreboding, I close the book of hope for the passage [of the law]. 51 public hearings, 200 hours of committee level debates, and eight months of consultations are all put to waste -- thrown into the abyss of uncertainty and darkness."

The law’s expected passage has now been delayed by at least ten months amid disagreements among lawmakers -- led by Senator Ferdinand Marcos Jr., the son of Ferdinand Marcos who ruled the Philippines for 21 years – who have presented a substitute bill to Congress that includes amendments to around 80 percent of the original draft.

Balindong, who belongs to the influential and well respected Maranao clan -- the second-largest Muslim group in the Philippines -- underlined in his statement that Moro legislators are outnumbered 28-1 in the senate.

"We are only ten lone voices in the wilderness of bias, prejudice and hatred," he said, and accused the House of collectively failing the Bangsamoro people -- the country's indigenous Muslims.

He claimed that the deaths fleshed out the biases and prejudices of those against the Moro and proved a setback to legislative deliberations on the law.

"[T]he Mamasapano misencounter has labeled us again as terrorists, extremists, enemies, traitors, and murderers. I have personally witnessed and heard the bashing and lashing against the Moros not only over the media but right in this hall of Congress," he wrote.

"Because of the Mamasapano, many of those who supported the BBL wittingly or unwittingly punished the Moro people by denying us of the required votes and even the quorum to deliberate the BBL."

Balindong also expressed concerns that with the looming threat of radicalism in the world, the failure to pass the law would entice young Moro to join radical groups instead of taking the path to peace.

"It is a disaster that extremists can easily exploit... For the Moro people, who have resisted subjugation for the past four hundred years, I am afraid the fight will continue, until there is justice. And more painful on my part is the knowledge that we have failed the next generation who will obviously inherit the vicious cycle of war and conflict.

“Realistically, the target of passing it in the House is remote,” Belmonte told reporters.

The president had prodded lawmakers to pass the measure, but the House has since been dogged by quorum problems.

Balindong claimed in his statement that most lawmakers showed no interest in passing the measure, even if an Ad Hoc panel on the Bangsamoro revised the draft bill by removing the opt-in provision, which would expand the core Bangsamoro area through a plebiscite and the provisions on the establishment of a Bangsamoro military command, police, auditing body, Civil Service Commission and poll body were also removed.

On Thursday, Rep. Tupay Loong -- from the southern Muslim province of Sulu -- shared Balindong’s frustration, saying that he is deeply saddened that after more than 17 years of arduous negotiations, the law has a very slim or no chance at all of being passed.

He not only blamed unwarranted suspicions against and mistrust in the Moro, but also what he claimed was a lack of interest by so many members of the House.

“Chances are high that it will not pass at all,” Iqbal told reporters on the sidelines of Monday's launch of the Journey to the Bangsamoro, which outlined various historical phases in the peace process.

“Signs are already pointing to that direction. There is lack of quorum in the House and I think, if it will not be passed these three days, I don’t think it will be passed at all," he said.

Aquino has been forced to stop down as Philippine presidents can only serve one six-year term of office.