Murder charges will be read against 21 police officers and members of a militia linked to the massacre of 57 people in S. Philippines last year, officials said. 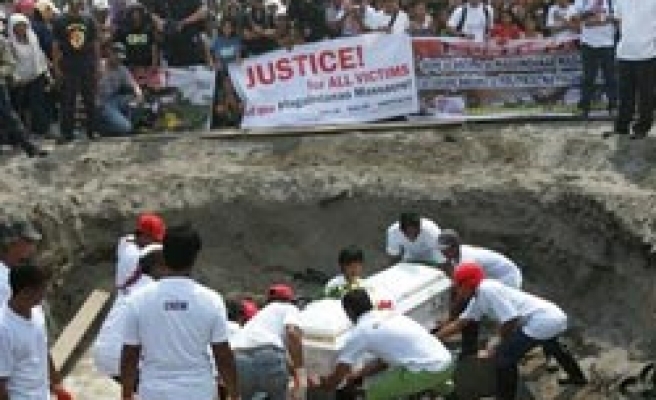 Murder charges will be read on Wednesday against 21 police officers and members of a militia linked to the massacre of 57 people in the southern Philippines last year, justice department officials said.

"At least 21 followers of the Ampatuan family will be arraigned tomorrow for their role in the massacre," de Lima told reporters.

Andal Ampatuan Jr, a town mayor in Maguindanao province, has pleaded not guilty to murder charges in the killing of 57 people, including 30 journalists.

Ampatuan's father, uncle and three brothers were also charged along with 191 police officers, soldiers and members of militia who were linked to the crime. Only 62 are in custody and 134 others, including 20 Ampatuan clan members, are still at large.

Last week, the government wanted to move witnesses to the massacre to protect them after a confrontation in the Manila detention facility where they are being held with others accused in the case.

In June, a witness in the case was shot dead. Earlier this month, de Lima ordered prosecutors to charge two people for attempting to bribe two witnesses to retract their testimony against the Ampatuans.

There has been an expectation the government of President Benigno Aquino III, in office since June 30, will be more aggressive than the previous administration in prosecuting those involved in the massacre last November.

The Ampatuan clan had ruled southern Maguindanao province on Mindanao island for a decade and were strong supporters of former president Gloria Macapagal Arroyo.

The massacre occurred on Nov. 23, 2009, when about 100 armed men attacked a convoy on their to way to witness the filing of nomination papers for a member of the Mangudadatu family, rivals to the Ampatuans, to stand in local elections.

The armed men also killed people who were not in the convoy but had seen the attacks, and then tried to bury the bodies and their vehicles in mass graves. All up, 57 people were killed in the country's worst incident of political violence.

The trial of the main suspect, Andal Ampatuan Jr, has been suspended since February.