Police also released about 1,500 of Hazare's followers detained in Delhi for defying the police order not to protest. 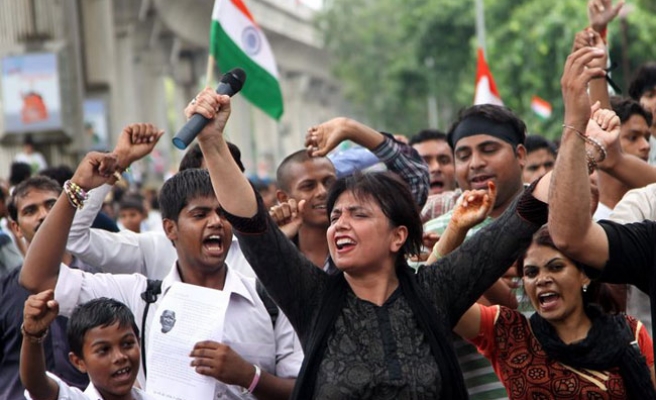 Police ordered the release of India's leading anti-corruption campaigner from jail on Tuesday after mounting nationwide protests against his arrest for planning a hunger strike forced a U-turn by beleaguered Prime Minister Manmohan Singh.

The arrest of the 74-year-old Anna Hazare early on Tuesday sparked outrage from opposition parties and spontaneous protests, from candle-light vigils to the burning of effigies of government figures, in cities across India.

Dressed in his trademark white shirt, white cap and spectacles in the style of independence leader Mahatma Gandhi, Hazare has won support from many Indians sick of endemic corruption in Asia's third largest economy.

A close aide who had also been arrested told reporters Hazare was refusing to leave the jail until he obtained government permission to continue his fast in a park in the capital.

Police also released about 1,500 of Hazare's followers detained in Delhi for defying the police order not to protest.

The turnaround could be a huge blow for Singh, already criticised as a weak and out-of-touch leader for the way his ruling Congress party grappled with a string of corruption scandals and high food inflation.

The decision to release Hazare may also signal a division within the government over how to deal with the popular activist.

In the capital, supporters angry at Hazare's detention earlier stormed police barricades, while thousands more gathered in front of the jail, parliament and India Gate.

"A man has the right to fast. Gandhi fasted despite everyone telling him not to... Not even the British (colonial) government prevented him," leading Indian lawyer and politician Ram Jethmalani told CNN IBN television.

"If the government stops protests or not, what it can't stop is the anger, which ultimately means bad news for Congress when people go to the polls," said M.J. Akbar, an editor at influential news magazine India Today.

Initially, Hazare was ordered held for one week and taken to Tihar jail, joining several government officials, including the former telecoms minister, who are under arrest over a multi-billion dollar telecoms graft scandal.

"The second freedom struggle has started ... This is a fight for change," Hazare said in a pre-recorded message broadcast on YouTube. "The protests should not stop. The time has come for no jail in the country to have a free space."

The arrests shocked many in a country with strong memories of Gandhi's independence battles against colonial rule with fasts and non-violent protests.

The question for many is whether Hazare's movement will grow in the fast-urbanising nation of 1.2 billion people whose increasingly assertive middle class is fed up with constant bribes, poor services and unaccountable leaders.

An anti-graft protester was found dead in a blood-soaked car in Bhopal, where hundreds had taken to the streets. A senior police officer told Reuters it was not clear whether the death was linked to the protests.

Home Minister Palaniappa Chidambaram said Hazare and several other leaders had been placed under "preventative arrest" to ensure they did not carry out a threat to protest.

"Protest is welcome, but it must be carried out under reasonable conditions," Chidambaram told a news conference.

"A murder of democracy"

Both houses of parliament were adjourned for the day after the opposition protested at the arrests of Hazare and his key aides, further undermining the chances that reform bills -- seen as crucial for Asia's third-largest economy -- will be passed.

"This is murder of democracy by the government within the House and outside the House," said Arun Jaitley, a senior leader of the opposition Hindu nationalist Bharatiya Janata Party.

The scandals, including a telecoms bribery scam that may have cost the government $39 billion, have smothered Singh's reform agenda, dented investor confidence and distracted parliament just as the $1.6 trillion economy is being hit by inflation and higher interest rates.

Those arrested included Kiran Bedi, one of India's first female police officers and a widely respected figure for her anti-graft drive. She was later released.

Police denied Hazare permission on Monday to fast in a park near a cricket stadium because he had refused to end his fast in three days and ensure no more than 5,000 people took part.

Opposition figures likened the crackdown to the 1975 "Emergency" when then-prime minister Indira Gandhi arrested thousands of opposition members to stay in power.

Singh and Congress had hardened their stance against Hazare in recent days, fearing that these protests could spiral.

Hazare rose to fame for lifting his village in western state of Maharashtra out of grinding poverty. His social activism has forced out senior government officials and helped create a right to information act for citizens.

Hazare became the unlikely thorn in the side of the Congress-led coalition when he first went on a hunger strike in April and won concessions from the government.

Tapping into a groundswell of discontent over corruption scandals in Singh's government, Hazare lobbied for a parliamentary bill creating a special ombudsman to bring crooked politicians, bureaucrats and judges to book.

Hazare called off that fast after the government promised to introduce the bill into parliament. The legislation was presented in early August, but activists slammed the draft version as toothless, prompting Hazare to renew his campaign.