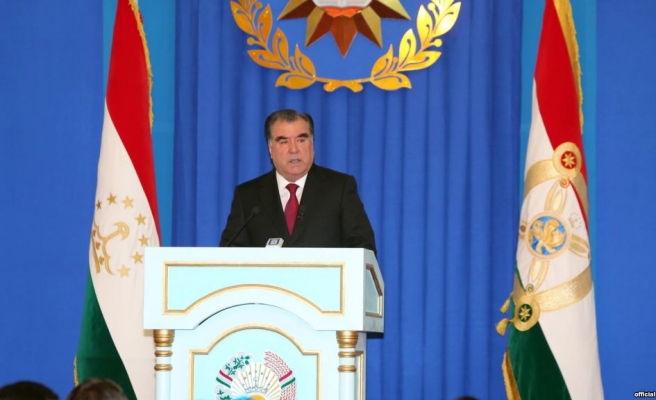 Tajikistan's leader said on Sunday attacks on police had been staged by militants sharing the views of ISIL and aiming to undermine his rule of the Muslim nation, local media reported.

Nine policemen were killed in gun attacks in the capital Dushanbe and the nearby city of Vahdat on Friday, police said.

The insurgents, led by a sacked deputy defense minister, General Abdukhalim Nazarzoda, then fled to a gorge, where they were surrounded by security forces, police said, adding that 13 rebels had been killed.

In Vahdat on Sunday, President Imomali Rakhmon told residents the attacks had been carried out by "terrorists with evil consciences to destabilize the situation", local media reported. The rebels "pursued the same goals as ISIL," he was quoted as saying.

The attacks came amid rising tension between Rakhmon's pro-Moscow secular government and the opposition.

The violence has raised fears of a return to unrest in the hard-up Central Asian nation that has remained volatile since a 1992-97 civil war between the Moscow-backed government and insurgents in which tens of thousands died.

More than 500 Tajiks have joined ISIL fighters, according to police estimates. Rakhmon said nearly 50 came from Vahdat and 11 had been killed in Syria and Iraq.

Police said on Sunday they had arrested a group of army officers, both in active service and retired, as well as several civilians in Dushanbe and a nearby village who had aided Nazarzoda, local media reported.

Nazarzoda was brought into the Tajik armed forces under a deal to end the civil war. Under the agreement the United Tajik Opposition, which had fought against Rakhmon, was entitled to 30 percent of posts in government departments.

Rakhmon, in power since 1992, has recently stepped up pressure on the Islamic Revival Party of Tajikistan (IRPT), the country's only legal religious political group.

Muhiddin Kabiri, the head of the IRPT, fled abroad in June, saying he was about to served with trumped-up criminal charges.

The 62-year-old president, who tolerates little dissent, justifies his tough methods by a need to keep radicalism in check in his nation of 8 million which borders Afghanistan.

Critics say however that Rakhmon's repressive policies may backfire, radicalizing many local Muslims.

Rakhmon faced embarrassment earlier this year when the U.S.-trained commander of the country's special police forces declared himself a member of ISIL.

Russian President Vladimir Putin called Rakhmon on Saturday to express his support for the Tajik leadership. The two presidents will hold a meeting during a regional summit in Dushanbe on Sept. 15, the Kremlin said.

Russia has said it is worried by the security situation in Central Asia following the withdrawal of NATO troops from Afghanistan.