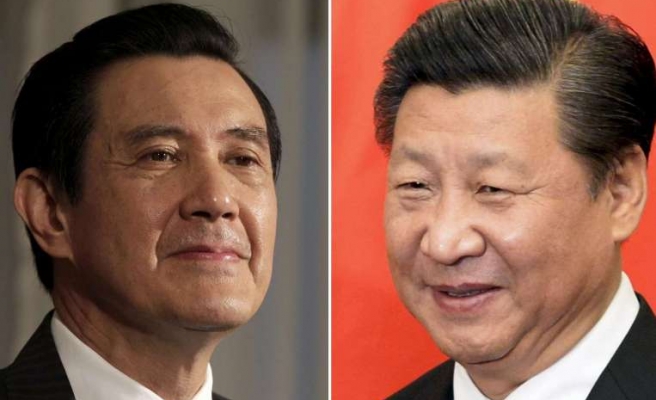 The presidents of China and Taiwan will meet this weekend in Singapore, the two sides said Wednesday, in the first such talks between the rivals since they split at the end of a civil war in 1949.

Seen as an attempt to boost the pro-Beijing Kuomintang's chances in Taiwan's presidential elections in January, the surprise meeting is likely to rattle voters already concerned about Beijing's growing influence on the island.

It follows a swift warming of relations with Beijing since Taiwan's President Ma Ying-jeou of the China-friendly Kuomintang (KMT) came to power in 2008.

The United States will be closely watching the summit between its major rival, China, and regional ally Taiwan -- the White House gave the meeting a cautious welcome.

"We would certainly welcome steps that are taken on both sides of the Taiwan Strait to try and reduce tensions and improve cross-Strait relations," spokesman Josh Earnest said.

Analysts said the US has given a tepid response because, while it supports the recent thaw and the benefit to regional stability, it believes ties between Taipei and Beijing have become too close under Ma.

"On the one hand it likes this thaw and improvement of relations across the Strait, on the other hand, it thinks that Ma's rapprochement policy went too far and has contributed to weaken Taiwan's security," said Jean-Pierre Cabestan, professor in political science and Hong Kong Baptist University.

China hailed the talks as a milestone in a dispatch on the state Xinhua news agency that said the two sides would "exchange views on promoting the peaceful development of cross-Strait relations", referring to the stretch of water that separates them.

"For the past seven years... the two sides have built up mutual trust and opened up a path of peaceful development," it cited Zhang Zhijun, head of the mainland's Taiwan affairs office, as saying.

"I believe the meeting will gain wide support from all walks of life across the Strait and the international community," he added.

There were few other details on the substance of the summit. Ma's spokesman said that the goal is to "secure cross-Strait peace," but that there would be no agreement signed nor any joint statement issued.

Beijing still considers the island part of its territory, even though they have been governed separately since Nationalist leader Chiang Kai-shek and his KMT forces fled to Taiwan after losing the civil war to Mao Zedong's communists.

To avoid the risk of a protocol problem over the title "president", Xinhua cited Zhang as saying that the two leaders will call each other "Mister".

The historic meeting comes as public sentiment in Taiwan has turned against closer relations as fears over Beijing's influence grow.

The main opposition China-sceptic Democratic Progressive Party (DPP) -- tipped to win the presidency in January -- heavily criticised the meeting, saying Ma was trying to influence the outcome of the elections.

"Any interaction between the two sides can only happen when it will benefit the country's free and democratic development as well as regional stabilisation," it said in a statement.

Around 50 protesters gathered outside the parliament building, with police also stepping up their presence.

"The parliament supports any dialogue that benefits cross strait and regional stability," Wang said after the meeting.

The premier and Hsia will meet opposition representatives later Wednesday.

Ma's hopes for a meeting with Xi have previously been dashed, despite improved relations.

He had wanted to meet the Chinese leader at an APEC meeting in Beijing in November but said China had refused.

Ma will step down next year after a maximum two terms and the DPP is expected to win the presidential election in January.

While closer ties with Beijing have brought trade pacts and a tourism boom, many voters feel big business has benefited, rather than ordinary Taiwanese people.

There are also concerns over lack of transparency -- last year saw the unprecedented occupation of parliament by student protesters angered by a trade agreement they said had been made in secret.

Ma has repeatedly defended his China-friendly policies, saying they have brought stability to the region.