Pro-democracy protesters back in Hong Kong

Up to 13,000 march for greater democracy in first protest since last year's Umbrella Movement 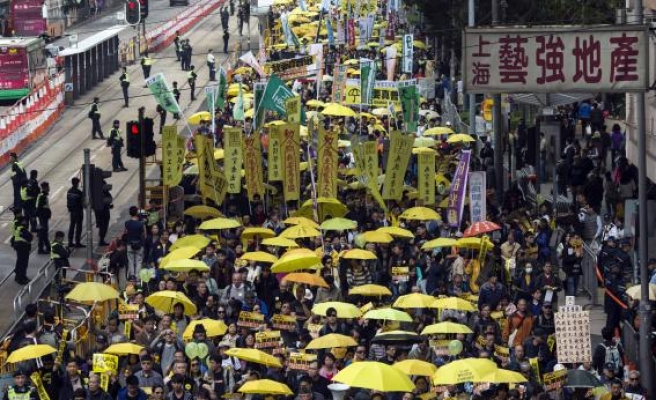 A heavy police presence and hundreds of yellow umbrellas – the symbol of the pro-democracy movement in the territory – marked the occasion.

Earlier expectations that 50,000 people would join the march appeared misplaced with the organizers putting the figure at 13,000 and the police reckoning 6,600 marchers.

"We understand there are some members of the public that must work,” organizer Daisy Chan said. “Some marshals were not able to attend the event today because of this."

Around 2,000 officers were on duty amid fears some protesters may attempt to stage sit-in demonstrations and “occupy” streets as they did during last year’s 79-day demonstration that represented the greatest challenge to Beijing since China took over the former British colony in 1997.

Police were deployed every few metres along the route but the atmosphere was less tense than during the Umbrella sit-ins.

Organizers from the Civil Human Rights Front said the rally would be peaceful and demonstrators would not seek to occupy any sites.

However, People Power member Tam Tak-Chi said some activists may march to Government House, away from the authorized route, to erect posters in an act of “civil disobedience.”

The protest snaked its way from Victoria Park, in Causeway Bay, to the financial district, known as Central. Both neighborhoods were the scene of protest sites during the September to December Umbrella occupations.

Demonstrators are calling for the chief executive election due in two years to be held under conditions of “genuine universal suffrage.” Currently, Beijing proposes screening candidates through a committee thought to be loyal to the communist party.

Housewife Carol Leung, 34, told the South China Morning Post she was marching for her eight-year-old son’s future. "I don’t want him to grow up in a city where he will go out on the street and suddenly be beaten by the police,” she said.

“I am afraid that Hong Kong will become like China.”

Benny Tai, a leader of the Occupy Central movement, said: "The civic society needs time to rest, but it doesn't mean they are no longer fighting for democracy."

Some protesters feared they might be attacked by pro-government groups later in the evening and armed themselves with makeshift shields.

As well as yellow umbrellas, the marchers carried balloons, placards and banners, including one decorated with a caricature of Chief Executive Leung Chun-ying and the words "reject fake democracy, we want real universal suffrage."

Many small businesses were opposed to the Umbrella occupations last year over worries the road closures would affect trade.

But Jason Pang, a luggage store owner, told the Post he accepted that people were frustrated with the government. He said: "The government must look out for all strata of society, not just their rich friends."