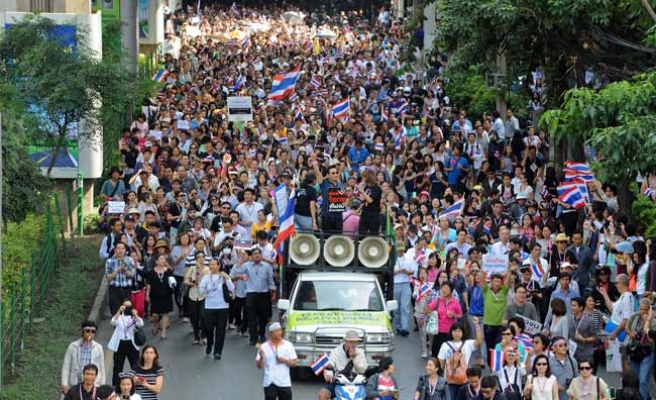 A prominent member of Thailand's Indian community is fighting efforts to force him out the country for joining anti-government protests and appealed on Thursday to King Bhumibol Adulyadej for help in finding justice.

Publishing company owner Satish Sehgal was born in what is now Pakistan in 1943 and came to Thailand as a five-year-old boy. Thailand has been his home ever since but he has never taken citizenship.

"I am not going anywhere, this is my home," Sehgal told Reuters in an interview in an upmarket Bangkok hotel coffee shop. "India is my country of birth but this is my home."

Sehgal is an ardent royalist, and says it was his appreciation for what the king has done for the Thai people, and for Thailand's minorities, that drew him into the protests aimed at ousting Prime Minister Yingluck Shinawatra.

His case touches on some of the underlying and largely unspoken tensions in Thai politics.

The protesters are drawn from Bangkok's middle class and royalist establishment.

Yingluck was swept to power in a 2011 election by the supporters of her brother, ousted former premier Thaksin Shinawatra, who won passionate loyalty in the rural north and northeast with policies aimed at helping the poor.

Critics of Thaksin, a former telecoms tycoon, see him as a crony capitalist who has used his wealth to buy elections since 2001. They also accuse him of disrespecting the monarchy.

Thaksin denies that and Yingluck has gone out of her way to show her loyalty. But nevertheless, the government's enemies have, usually with just innuendo, raised questions about Thaksin's attitude towards the monarchy.

"I DON'T KNOW WHAT THEY THINK"

A slim man with grey hair and three telephones buzzing and beeping on a table in front of him, Sehgal denies any political affiliation and defends his participation in the protests and his speeches at rallies extolling the king.

"Whatever I have done is because I feel I owe the Thai people and His Majesty the King," Sehgal said, emotion briefly choking his words.

Sehgal said he told rallies that everyone loves the king: ethnic Chinese, ethnic Indian and "farang", or Westerners.

"But there are some Thais, I don't know what they think," he said, citing his speech.

Sehgal knows Thaksin, says he acted as an adviser for members of Thaksin's government and travelled with him twice on delegations to India. He declines to say what he thinks of him now.

Chalerm Yoobumrung, the government minister overseeing a state of emergency, told reporters on Thursday Sehgal had led protesters to government buildings that resulted in damage.

"If Satish didn't do anything, why would I be deporting him?" Chalerm asked.

Sehgal says he did take part in a protest at a government building but denies breaking any law. He said he had heard little directly from the authorities but understood that his residence permit was being cancelled.

His lawyer presented a petition for justice with the Royal Household earlier on Thursday.

"All the allegations are totally unfounded. This is harassment," Sehgal said. "I've done no wrong. I'm going to fight."