Official numbers were way down on last year's event with organizers estimating 1,500 had turned out, compared with tens of thousands in 2017. 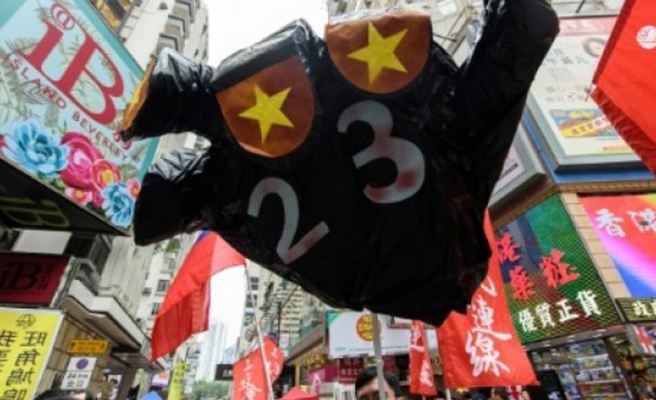 Protesters marched in Hong Kong Monday against suppression by Beijing as fears grow that freedoms in the semi-autonomous city are seriously under threat.But an AFP journalist at the scene estimated slightly higher, although crowds Monday were visibly smaller than the previous year.

The pro-democracy protest comes a week after Hong Kong banned a pro-independence party on the grounds it was a threat to national security, the first time a political party has been prohibited since the city was handed back to China by Britain in 1997.

The emergence of an independence movement calling for Hong Kong to split from China has incensed Beijing as it emphasises the importance of territorial integrity and has led to a crackdown on political expression.

Leading pro-democracy campaigner Joshua Wong said he feared his party, Demosisto, could be next because it promotes self-determination for Hong Kong.

One high-profile Demosisto candidate was already barred from a recent by-election.

"We need to protect and defend the freedom of association in Hong Kong," Wong, 21, told AFP at the rally.

Independence supporters were initially blocked by police from entering the square at the end point of the march, but the crowd managed to push through. The rally dispersed around 6:00 pm (1000 GMT).

The pro-democracy protest has held every October 1, China's National Day, which marks the communist party's establishment of the People's Republic of China.

But despite many residents' dissatisfaction with China's growing influence, the numbers attending the city's traditional street protests have shrunk since massive 2014 pro-democracy rallies failed to win reform.

Yuet Wong, a 21-year-old student, said there was a sense of powerlessness among young people, particularly after the disqualification of elected pro-democracy legislators, but said she was still motivated to come out.

"Even if we can't achieve anything immediately, we want to show the government we won't be compromised and won't be silent," she told AFP.