A day after deadly clashes left 4 dead, thousands of protesters surround prime minister's temporary office with the intention of forcing her from power. 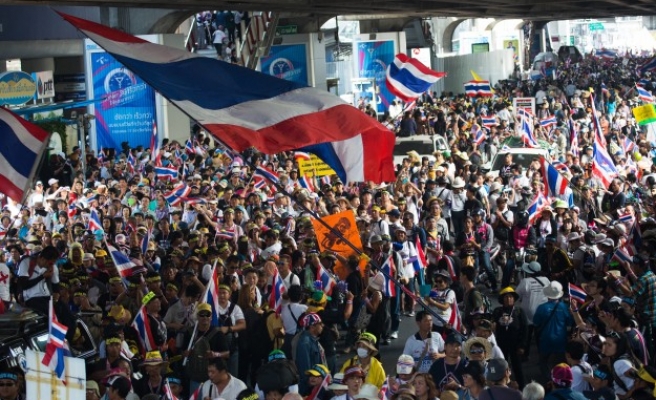 A day after deadly clashes between police and anti-government demonstrators shook Bangkok, thousands of protesters surrounded the Thai prime minister's temporary office on Wednesday in a continued effort to force her from power.

Around 5,000 protesters adorned with white, blue and red ribbons – the colors of the Thai national flag – besieged the Office of the Permanent Secretary of Defence in the north of Bangkok, which has served as the government's temporary office since the official building was blockaded by protesters over three months ago.

Officials said that Shinawatra did not attend the building - which was protected by several hundred unarmed soldiers - on Wednesday.

“We know she is not there,” Maleeka, a Bangkok businesswoman among the protesters, told the Andolu Agency. “But we want to deliver a symbolic message that she has to get out of power. She should go because the farmers are suffering too much.”

On Tuesday, the National Anti-corruption Commission, a constitution-sanctioned independent agency, announced that it will press charges against Shinawatra for negligence and dereliction of duty in relation to a rice subsidies program. The Commission does not have the power of indictment; but it can transfer cases to the Thai Supreme Court.

Since 2011, the government has bought rice from farmers way above market price, but the program has run into massive financial losses and is criticized for opening the door to corruption.

Thousands of rice-farmers are currently protesting in Bangkok demanding the government pay them their dues.

“I feel very sad for the farmers. They have no money. The government lied to them,” a female protester - who wished to be solely identified by her nickname Aen for reasons of anonymity - told AA.

Tuesday's police operation failed to reclaim much ground from the demonstrators who continue to occupy an area close to Government House in the old quarter of Bangkok.

Erawan Medical Service - an independent organization - said a police officer and three civilians died, and 64 others were injured in Tuesday's clashes. Among them were two journalists working for Spanish news agency EFE and a Hong Kong TV station.

The deputy-prime minister in charge of security, Chalerm Yoobamrung, said that the operation will continue in coming days “until all areas are retaken," but there was no sign of any police move Wednesday.

Shinawatra is facing a wave of opposition protests after her government pushed through an amnesty which would have lifted a conviction against her brother, Thaksin – a deeply divisive figure whose Thai Rak Thai (Thai Love Thai) party led the country from 2001 to 2006 until he was overthrown in a coup and then found guilty of abuse of power.

Confronted by massive protests, the government withdrew the bill, but the opposition has alleged massive corruption by the government and Shinawatra family.

Shinawatra dissolved parliament December 9 and called February 2 elections, which were disrupted by protesters who want an unelected “people’s council” to run Thailand until the political system is reformed.

Anti-government movement the People’s Democratic Reform Committee (PDRC) has asked the Constitutional Court to dissolve the government for “abuse of power” for its organization of the February elections.