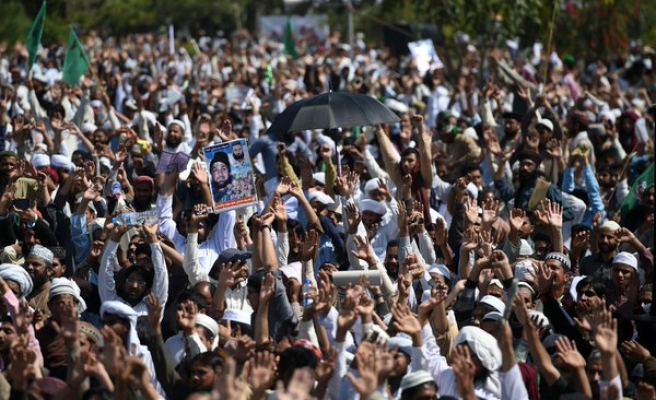 The army was called out after thousands of infuriated protesters ran over barricades to stage a sit-in outside Pakistan's parliament in Islamabad amid day-long skirmishes that left dozens of security personnel, and protesters injured.

TV footage aired on local channels showed army vehicles moving towards the parliament house where thousands of protesters who managed to reach the area, despite massive police deployment and barricades near the site, commonly known as "red zone".

The army's triple-one brigade, which has been assigned the task to protect the state buildings in the capital, moved in on the government's directives, an army spokesman said.

Hundreds of thousands of protesters earlier had gathered at the adjoining Rawalpindi city to attend the memorial ceremony for a former elite police commando Mumtaz Qadri who was hanged last month for killing a Punjab governor, Salman Taseer, in 2011 for alleged blasphemous remarks.

Thousands of protesters set off their march on the parliament house igniting seemingly pitched battles with security forces.

The riot police fired teargas and charged the protesters who in return pelted stones, burned vehicles, and containers placed at several entry points to the capital to stop the crowds.

Around 60 policemen and protesters were injured in the day-long skirmishes, local Geo TV reported. Following the violent clashes, the police backed away allowing angry protesters to almost reach the parliament house resulting in the government calling out the army.

The protesters attacked TV channels' vans and crew as the local media completely did not report on the event -- as was case with the funeral ceremony for Mumtaz Qadri last month -- in line with government directives.

Also, a group of protesters threw a Molotov cocktail at the Karachi Press Club and smashed vehicles parked outside before fleeing.

Meanwhile, the Islamabad administration managed to engage the protesters' leadership in talks in order to persuade them to end the sit-in. The protesters were still sitting in front of the parliament building as of filing of this report.