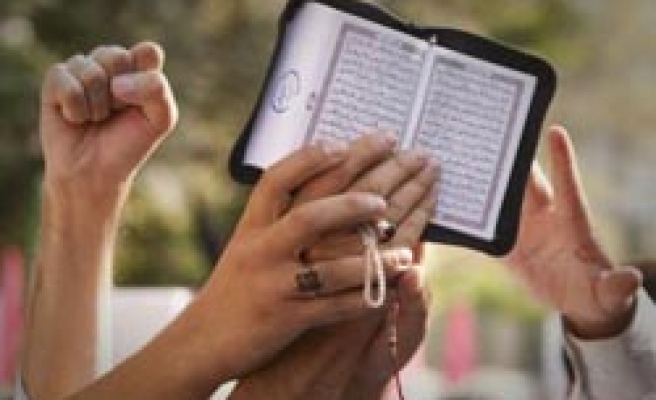 Scores of Iranians protested on Monday a U.S. church plan on burning Islamic Holy Book, a grave insult to Muslims who believe it to be the literal word of God, urging White House to take pre-emptive measures.

Protesters scuffled on Monday with riot police outside the Swiss embassy during protests over a U.S. pastor's threat to burn copies of the Koran.

Iran does not have diplomatic ties with the United States and U.S. interests in Tehran are handled by the Swiss embassy.

"Stopping the Koran burning plan ... is not enough and the American government should be responsible and take pre-emptive measures," Foreign Ministry spokesman Ramin Mehmanparast was quoted as saying on Monday.

About 1,000 protesters threw stones at the building and scuffled with 300 riot police guarding the embassy.

Pastor Terry Jones finally dropped his plan to burn copies of the Islamic holy book on the anniversary of the Sept. 11 attacks on the United States.

But there were at least two incidents of abuse of the Koran in Lower Manhattan. Separately, two evangelical preachers not affiliated with any mainstream church burned two copies of the Koran in Tennessee.

The burning incidents sparked outrage around the world and triggered massive protests in Afghanistan and Kashmir.

Iran's Supreme Leader Ayatollah Ali Khamenei on Monday called the plan to burn the Koran "an insane and hateful" act and blamed "the Zionists working within the American government" for masterminding it.

"With deceiving and half-empty words, the leaders of the American regime cannot acquit themselves of ... accompanying this ugly act," Khamenei was quoted as saying by state television.

"To prove its claim of not being involved ... the American government should appropriately punish the main figures behind this great crime," he added.

At Monday's protests, some demonstrators were holding copies of the Koran.

Iran's state television showed pictures of other demonstrations throughout the country on Monday.

High-ranking cleric Ayatollah Lotfollah Safi said Muslims would not be "satisfied with only condemnations" of the plan and that the world expected to see an appropriate response by U.S. leaders, Isna news agency reported.

Khamenei made clear the "incident had nothing to do with Church and Christianity".

"We Muslims will never act this same way with the sanctities of other religions," he said.