Such set-piece rallies, organised by the authorities, are a regular feature of political life in Pyongyang, and are intended as a physical demonstration of popular support for the leadership. 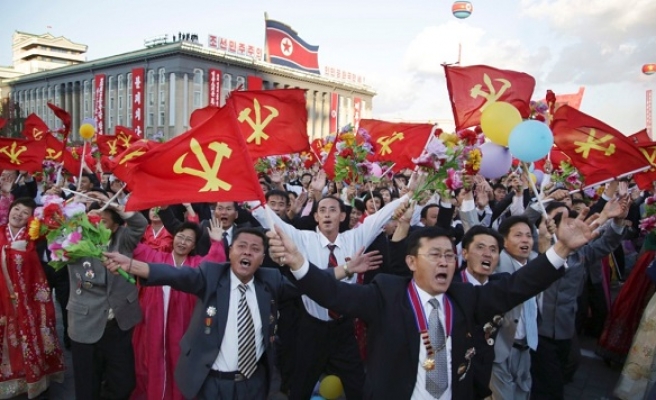 Tens of thousands of Pyongyang residents were gathered in the capital's Kim Il-Sung Square Saturday to laud leader Kim Jong-Un's denunciation of US President Donald Trump.

Students in white shirts and red ties held up the red flag of the ruling Workers' Party, with a yellow ink brush representing intellectuals, a hammer for the workers, and a sickle for the peasantry.

Ranks of workers and residents listened, their fists clenched, as speakers repeated Kim's denigration of Trump as "mentally deranged" and a "dotard".

The US president dubbed Kim "Rocket Man" in a speech at the United Nations last week in which he threatened to "totally destroy" the North if it attacked the US or its allies.

In a statement on Friday Kim responded by saying that "a frightened dog barks louder" and Trump would "pay dearly" for his comments -- triggering the US head of state to describe him as a "madman".

On one side of the square a giant poster depicted innumerable red missiles plunging towards a collapsing US Capitol, with the slogan "Korea's Answer".

The bellicose rhetoric between Kim and Trump has become increasingly personal, and raised fears of miscalculation in the standoff over the North's nuclear weapons and ballistic missiles.

"I would like to put down my pen and take up arms again to perform my duty to defend the fatherland," said Pyongyang Mechanical University student Ri Il Ung, 24.

"Trump is a warmonger and a backstreet gangster," he added. "It's quite ridiculous that such a person could become a politician."

The North Korean regime is intensely militaristic and bases its claim to legitimacy on defending the country from external aggression, and analysts say that Trump's comments are grist to its mill.

Kim is also using the drama to reinforce his leadership, they add.

Pyongyang insists it needs nuclear arms to protect itself from a US invasion, and carried out its sixth atomic test earlier this month, earning itself an eighth set of United Nations Security Council sanctions.

It has also tested two intercontinental ballistic missiles that appeared to bring much of the US mainland into range, and regularly issues bloodcurdling threats.

Thousands of people marched through the square, past portraits of Kim's predecessors, his father and grandfather Kim Jong-Il and Kim Il-Sung, behind a banner proclaiming: "Let us safeguard with our lives the central committee of the party headed by the great comrade Kim Jong-Un."

Environmental protection ministry official Han Kwang Nam told AFP: "We fear nothing, we are not afraid because we have the greatest ever general, the respected Supreme Leader Comrade Kim Jong-Un.