Thousands of Muslims have taken to the streets across Afghanistan as a US pastor announces conflicting remarks on a plan to burn the Quran. 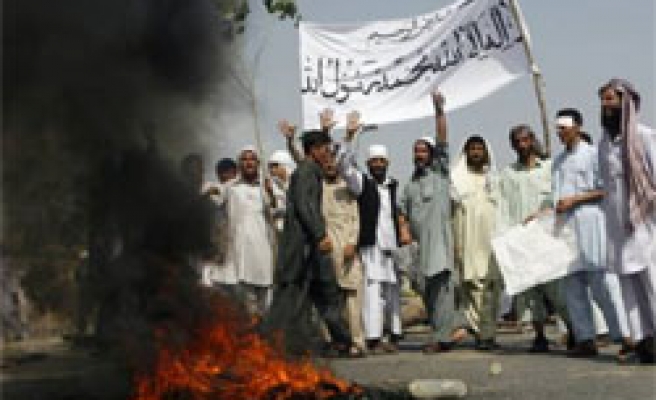 Thousands of Muslims have taken to the streets across Afghanistan as a US pastor announces conflicting remarks on a plan to burn the Quran.

In a turbulent start to the festival of Eid al-Fitr, when Muslims worldwide mark the end of the Ramadan fasting month, leaders of countries including Afghanistan and Indonesia issued dire warnings against the provocative act.

One protester was shot dead and several were wounded outside a German-run NATO base in northeast Afghanistan and NATO said it was investigating. Demonstrations later spread to the capital, Kabul, and at least four other provinces.

A crowd, estimated at 10,000 by a government official, poured out of mosques into the streets of Faizabad, the capital of Badakhshan in Afghanistan's northeast, after special prayers for Eid al-Fitr, the end of the Muslim fasting month of Ramadan.

"Protester shot dead at NATO base"

One protester was shot dead when a smaller group attacked a German-run NATO base in Faizabad, hurling stones at the outpost, a spokesman for the provincial government said, according to Reuters news agency.

Afghan security forces rushed to the scene to restore order and three police were hurt when hit by stones thrown by the crowd, the spokesman said.

A spokesman for the NATO-led International Security Assistance Force in Kabul said ISAF was aware of protests happening in Faizabad and were checking the incident.

Several hundred gathered in a northern district of Kabul, while about 2,000 marched on a government building in western Farah, officials and witnesses said. There were also protests in nearby Badghis in the northwest and Ghor and Herat in the west.

In eastern Nangahar, tribal chiefs threatened to attack NATO bases near the Pakistan border if Jones went ahead with the plan. "If they do this, we will attack American bases and close the highway used by convoys supplying American troops," a cleric named Zahidullah told Reuters.

At mosques in the capital, clerics also labeled the plan dangerous. "Muslims are ready to sacrifice their sons, fathers and mothers for Islam and the Quran," one preacher said at one Kabul mosque to cries of "Allahu Akbar" (God is Greatest).

In neighouring Pakistan, hundreds of protesters rallied in the central city of Multan to torch US flags.

The governments of Pakistan and India, which after Indonesia have the world's biggest Muslim populations, have added their voices to a chorus of global outrage against Jones.

Terry Jones, a Christian pastor of a small church in Gainesville, Florida, has called off his planned Quran-burning event slated for the ninth anniversary of the September 11 attacks, after drawing international condemnation and a warning from Barack Obama, the US president, that it could provoke al-Qaeda suicide bombings and incite violence around the world.

"Right now we have no plans to go ahead with the event," Jones confirmed to the US television programme Good Morning America on Friday.

Jones, the head of the Dove World Outreach Center, first announced the event's suspension on Thursday, but then indicated he might reconsider, accusing a Muslim leader of lying to him about moving a planned Islamic centre in New York.

Imam Muhammad Musri, president of the Islamic Society of central Florida, and the sponsor of the New York mosque both denied such an agreement had been reached.

However, Jones says he will fly to New York on Saturday with Musri to meet Feisal Abdul Rauf, the New York imam at the centre of another controversy.

"We believe that the imam is going to keep his word, what he promised us yesterday ... We believe that we are, as he said, and promised, going to meet with the imam in New York tomorrow," Jones told Good Morning America.