Wirathu was unharmed, despite being 40 feet (12 metres) from the blast, according to police. 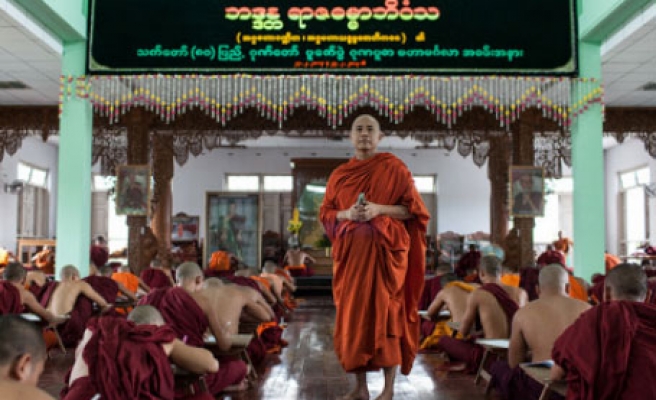 A bomb exploded metres away from a radical Buddhist monk as he delivered a mass sermon in Myanmar, police said on Monday, the latest flare-up in tensions pitting Buddhists against minority Muslims.

Wirathu, the prominent monk who heads a movement accused of stirring violence against Muslims, said he believed the blast on Sunday evening in Myanmar's second city, Mandalay, was intended to silence him.

The home-made bomb went off inside a parked car, according to police and witnesses.

Tensions have been smouldering between radical elements of Myanmar's Buddhist majority and Muslims. Bouts of religious violence have killed at least 237 people and displaced 150,000 in the past year, testing the resolve of a two-year-old quasi-civilian government.

The device exploded during a ceremony conducted by Wirathu, who once called himself "the Burmese bin Laden". He is the chief proponent of a movement known as 969, which reformist President Thein Sein's office has described as a "symbol of peace".

Wirathu was unharmed, despite being 40 feet (12 metres) from the blast, according to police. Five people were slightly injured, including a novice monk.

Sources close to Wirathu could not be immediately reached for comment. However, the monk told Radio Free Asia's Burmese service that he had previously received a sound recording containing a threat to his life, which he believed was the voice of a Muslim cleric.

The bomb, he said, was intended to silence him.

"I've no idea who exactly carried out this explosion. But it must have been done by those who usually carry out terrorist acts," he told Radio Free Asia.

"The motive could be to shut my mouth."

Reuters investigations in two of the hotspots of unrest - Rakhine state and the central city of Meikhtila - have revealed the violence was on both occasions fanned by monks who led Buddhist mobs.

"We can say it was a small hand-made bomb that caused the explosion. We are not in a position to reveal any more information at the moment since investigation is ongoing," a Mandalay police officer told Reuters by telephone, requesting anonymity because he was not authorised to speak to the media.

A witness said security had since been stepped up in Mandalay. Even prior to the explosion, security had been tight during Buddhist events held in the past week in the commercial capital, Yangon.

The explosion took place on the fifth and final day of mass sermons held by Wirathu.

The president's office, which says it wants to foster peace, tolerance and unity in ethnically diverse Myanmar, has described Wirathu as "a son of Lord Buddha". Buddhists make up about 90 percent of the estimated 60 million population.

The 969 movement has been accused of stirring anti-Muslim sentiment in a deeply Buddhist nation, where curbs on freedom of speech and assembly have eased since the end of military rule two years ago.

A Reuters investigation last month showed 969 monks were providing a moral justification for a wave of anti-Muslim bloodshed that could derail Myanmar's nascent reforms.

Government officials were unavailable for comment about Sunday's explosion.