Sinha said many people were made homeless by the disaster. 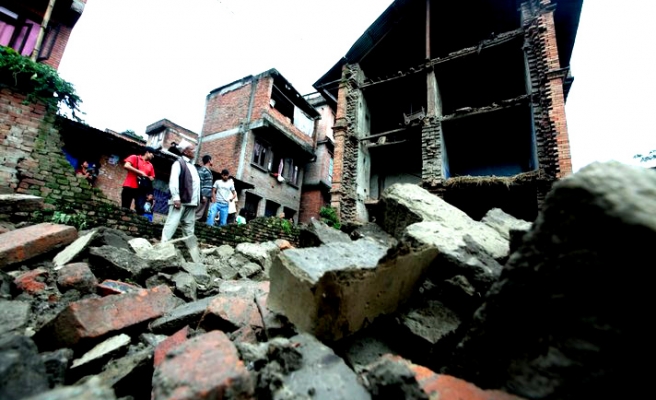 Soldiers and rescuers hiked in lashing rain to isolated Himalayan villages on Monday in search of survivors after a 6.9 magnitude earthquake killed 54 people in India, Nepal and the Chinese region of Tibet.

Rescuers pulled victims from rubble as the number of casualties climbed to 31 in the "Shangri-la" northeastern Indian state of Sikkim, the epicentre of Sunday night's quake felt more than 500 miles away in New Delhi.

Thick cloud prevented helicopters from flying over the affected areas, home to some of the world's highest peaks but some mountain passes blocked by landslides were reopened, police helping rescue efforts said.

"The earthquake has loosened the hill-faces, and when it rains, it causes landslides. So the situation is still very dangerous," said Deepak Pandey, spokesman for the Indo-Tibetan Border police.

"We have rescued more than 400 people since last night," including from the worst hit area Pegong in the north, Pandey said.

It may take days for the final number of casualties to be confirmed but border police said they did not think the death toll would be on a massive scale.

At least two died in Bihar state, south of Sikkim, while six died in the Indian state of West Bengal.

Television pictures showed people in Sikkim's main city, Gangtok, sitting on roadsides under umbrellas in the heavy rain -- reluctant to go inside their homes for fear of aftershocks.

"People are still panicky," Gangtok resident Pawan Thapa told Reuters by phone after the quake that shook buildings more than a minute. "We spent the whole night outside our homes."

It has been raining for four straight days in parts of Sikkim. The temperature in the quake zone was about 8 degrees Celsius (46 degrees Fahrenheit) and could drop overnight.

Shops, businesses and offices were closed in Gangtok and neighbouring areas, the resident said. Many towns remained without electricity. Water supplies were scarce because of burst pipes and telephone communication was patchy.

For centuries a rarely visited Buddhist kingdom known for spectacular mountains and glacial lakes, Sikkim joined India in 1975. With 600,000 residents, it is the country's most sparsely populated state and borders Bhutan, Tibet in China and Nepal.

The state's economy boomed in recent years as it opened up to tourism and cross border trade with China. Residents say landslides are a threat to hastily built new buildings in its mountain towns.

The quake hit at 6.10 local time (12.40 GMT) and was felt in five countries including Bangladesh and Buddhist kingdom Bhutan.

Outside India, at least seven people died in Nepal, three of them when a wall on the perimeter of the British Embassy in Kathmandu collapsed on to a car and a motorcycle. Seven died and hundreds were made homeless in Tibet, China's state-run news agency Xinhua said.

More than a thousand Chinese soldiers were sent to help rescue efforts near the border.

"We need to prepare for possibly a much worse situation and we are already getting stocks of tarpaulins and other basic aid ready," Victoria Bannon, of the International Federation of the Red Cross told Reuters by phone from Nepal, where rain, poor communications and landslides were also hampering efforts.

Several hundred rescue workers and medics were expected to arrive in Sikkim in the evening after soldiers cleared a landslide blocking the road from the nearest airport, 100 km (60 miles) away.

Army officers and border police stationed near the epicenter of the quake in the north of the state, which has a large military deployment close to the Chinese border, said they were hopeful the death toll will not rise much more.

"The loss of life has not been much," said Ranjit Sinha, Director General of Indo-Tibetan Border Police, whose foot patrols sent radio reports of casualties as they reached isolated villages.

Sinha said many people were made homeless by the disaster.

More than a thousand people fled damaged homes to government shelters in Gangtok. More than 100 people were injured, while hundreds of tourists, Indian and foreign, were stranded for hours on the main road out of the state to West Bengal in the south.

The quake shook buildings as far away as New Delhi in India and Bangladesh.

Several earthquakes have hit north and east India this year, but none has caused major damage or injuries.

In 2001, a devastating earthquake in the western state of Gujarat killed at least 19,700 people and caused damage in neighbouring Pakistan.