The pope flew to Tacloban, ground zero of Typhoon Haiyan, which devastated the area around Leyte Island 14 months ago, killing at least 6,300 people, leaving a million others homeless and displacing four million 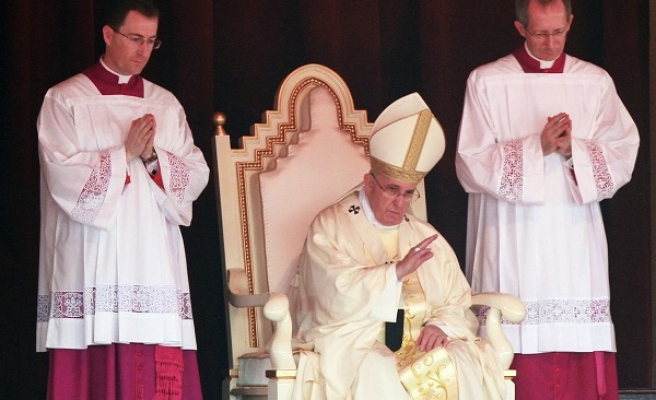 Pope Francis, wearing a plastic poncho against gusting winds and driving rain, kept a promise on Saturday to comfort survivors of a devastating 2013 typhoon but a new storm forced him to leave early.

The pope flew to Tacloban, ground zero of Typhoon Haiyan, which devastated the area around Leyte Island 14 months ago, killing at least 6,300 people, leaving a million others homeless and displacing four million.

The strong wind blew the white skull cap from Francis' head and rippled his white cassock as he disembarked from his plane. He donned the same type of yellow, transparent poncho worn by the hundreds of thousands of people in the area as tropical storm Mekkhala hit, with wind gusts of up to 130 km/h (80 mph).

At a Mass near the airport, he put aside his prepared homily and delivered a very personal, emotional message of comfort to survivors, who stood amid puddles in mud-soaked fields and along roadsides.

He told them that he had vowed to make the trip in November 2013 when he saw reports of the devastation Haiyan had caused.

The Pope, speaking through an interpreter who translated his comments into English from his native Spanish, said he "respected the feelings" of those who felt they had been let down by God because of the disaster but implored them to move forward in their faith.

He asked the crowd to hold a moment of silence and thanked those who helped in the rescue effort after the worst recorded storm ever to make landfall.

"This is what comes from my heart and forgive me if I have no other words to express," Francis said.

"What he said pierced my heart," said Maria Alda Panahustad. "My house was destroyed by (Haiyan) and again by Ruby," she said, referring to another storm that hit the central Philippines last month, killing 27 people..

The papal Mass was accelerated and the remainder of the programme - a visit to a nearby cathedral, lunch with survivors and the blessing of a new centre for the poor - was compacted so he could leave four hours early because of worsening conditions.

In the cathedral, he apologised for leaving early. "I'm sad about this, truly saddened," he said.

The Vatican said he blessed the centre from his car. He also stopped briefly at the home of a poor fisherman on his way into Tacloban city after the Mass.

Minutes after the Pope's plane left for Manila, a jet carrying 11 people, including Philippine Cabinet members, overshot the runway at Tacloban because of the storm. No one was hurt but authorities closed the airport.

A 21-year-old volunteer was killed when a scaffolding holding huge speakers was blown over by the wind, Leyte health officials said.

Saturday's storm was an eerie reminder of Haiyan, which hit the same area with 250 kph (155 mph) winds and created a seven-metre high storm surge, wiping out almost everything in its path when it swept ashore on Nov. 8, 2013.

Haiyan destroyed about 90 percent of Tacloban city, 650 km (400 miles) southeast of Manila. More than 14.5 million people were affected in six regions and 44 provinces.

The government estimates it needs almost 170 billion pesos ($3.8 billion) to rebuild the affected communities, including the construction of a four-metre high dike along the 27-km (17 miles) coastline to prevent a repeat of the disaster.