The retreating floodwaters in Indian-controlled Kashmir have left Srinagar without food, clean water or essential services as the threat of water-borne disease looms. 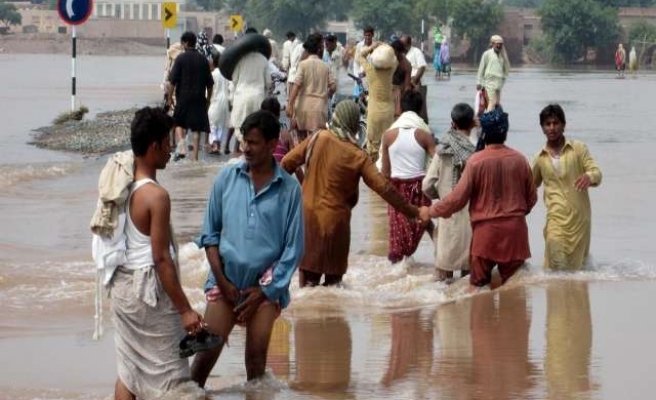 As water recedes in Srinagar after the worst floods in more than a century, tens of thousands are still trapped without access to food or clean water.

The flooding began last Friday and swamped most of the city in Indian-controlled Kashmir, including hospitals and public services, many of which remain under water.

As the water levels slowly retreated, parts of Srinagar moved towards normality but hundreds have been left searching for relatives.

With state services largely absent, relief work is being conducted by thousands of small aid and medical camps dotting the city's streets.

“We have received no help from the government so far,” Mohammad Yaqoob Wani, who was distributing relief to people at the Tengpora-Bypass highway, said.

“We have been helped by local people who came with rice, medicine, milk and bottles of water. It is a strange time in my life to see a villager carry a crate of apples from 100km away and wade through chest high water to reach to us.”

The local government has blamed the media for ignoring its efforts while praising the armed forces.

Kashmir’s Rural Development Minister Ali Mohamad Sagar said: “It is unfortunate that the Indian media only sang the praises of the army and air force for their rescue and relief work and completely blanked out the work of the local government that, too, has been working day and night since the floods came.”

The Indian government has stopped any foreign aid from reaching Kashmir and has declined offers for help.

Meanwhile, thousands of animal carcasses have raised concerns over the possibility of diseases like cholera.

Local volunteer Shahid Ahmad told The Anadolu Agency: “We had to wade through a stretch where hundreds of dead chickens, dogs and cows were floating in the water. Their bodies were bloated and their stench unbearable.”

He said water levels in Chakpora, on the outskirts of Srinagar, were still more than four feet high and many children were suffering from diarrhea and vomiting.

“We need to take immediate measures or a major epidemic awaits us,” Ahmad warned.

While the number of casualties still unclear, dead bodies are still being discovered.

According to local media, at least 20 dead bodies have been found so far in Srinagar.

Several hundreds of houses are reported to have collapsed and the central business hub, Lal Chowk, is still under water, causing huge financial losses.

“The magnitude of this disaster is beyond imagination and we need support from every quarter,” Abid Rashid, Srinagar sub-divisional magistrate, said. “We are trying our best but this is a major calamity.”

Across Kashmir – both the Indian and Pakistani sectors – and Pakistan’s Punjab region more than 500 people have been killed and millions displaced by the floods.