Twelve bodies have been recovered from the 3,067-metre (10,062 feet) peak but at least 36 are feared to have died, with recovery hampered by high levels of toxic gas and ash 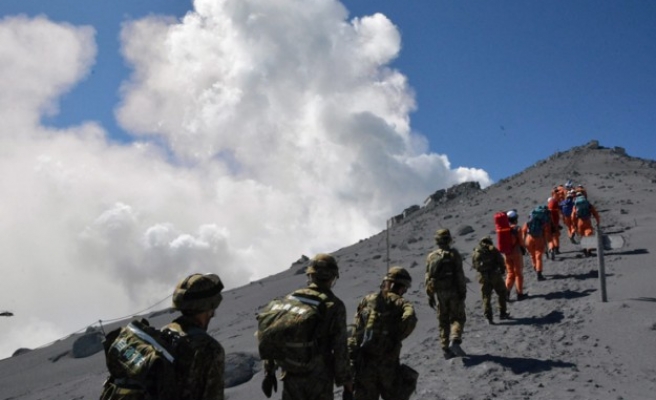 Search and recovery efforts for at least two dozen victims of Japan's worst volcanic eruption in decades were called off on Tuesday due to worries about rising volcanic activity, including the chance of another steam explosion.

Hundreds of military searchers had been preparing to enter Mount Ontake by foot and helicopter to resume recovery of at least 24 people caught in a deadly rain of ash and stone after the peak erupted without warning on Saturday when it was crowded with hikers, including children.

Twelve bodies have been recovered from the 3,067-metre (10,062 feet) peak but at least 36 are feared to have died, with recovery hampered by high levels of toxic gas and ash piled hip-high in places on the still-smoking mountain. At least 69 people have been injured, 30 of them seriously.

"I just want to know something soon," Kiyokazu Tokoro told Japanese television. His 26-year-old son was on the mountain with his girlfriend and has yet to be found.

Increasingly strong volcanic tremors on Tuesday morning raised fears that the peak could spew out more rock or even be heading towards another steam explosion, an official at Japan's Meteorological Agency, which monitors volcanoes, told Reuters.

"The strength of the tremors increased last night, diminished and then rose again early this morning. There's the chance things could get worse, so caution is needed," said Yasuhide Hasegawa, at the agency's Volcano Division, adding the chance of an explosion like Saturday's could not be ruled out.

"This points to possibly increasing pressure due to steam inside the volcano, and if it exploded rocks could be thrown around, endangering rescuers," he added.

More than 800 rescuers had been ready to resume rescue efforts on the peak, which was spewing ash and smoke some 400 meters into the air.

The weekend explosion may have propelled rocks so violently they could have reached the speed of an airplane, said Kazuaki Ito, a volcanologist who surveyed Ontake after it erupted in 1979, its first eruption in recorded history.

"It is hard to know how the victims died. They may have been struck by rocks or inhaled ash," he told NTV.

Most of the victims appear to have been found near a shrine at the narrow, rocky top of the peak, Japanese media said. They may include 11-year-old Akari Nagayama, who reached the summit earlier than the rest of a group that included her mother.

Japan is one of the world's most seismically active nations. In 1991, 43 people died in a pyroclastic flow, a superheated current of gas and rock, at Mount Unzen in the southwest.

Ontake, Japan's second-highest active volcano, last had a minor eruption seven years ago. Researchers say predicting a steam-driven explosion is especially difficult - and even harder with limited information about a peak's past volcanic activity.

Japan monitors 47 of its 110 active volcanoes around the clock, but the research budget has always been less than for earthquakes and critics say the equipment is insufficient.

"Maintenance of monitoring devices has been delayed, and the equipment is getting old," Yasuo Ogawa, at the Tokyo Institute of Technology's Volcanic Fluid Research Centre, told Reuters.

Hasegawa, at the Japan Meterological Agency, said he was not aware of budget changes and technology now allows real-time observations from afar. Surveillance was extended in 2009.

Ogawa disagrees. "I don't think the network is adequate and there aren't enough people," he said. "Hopefully, everybody can use this as an opportunity to rethink things."