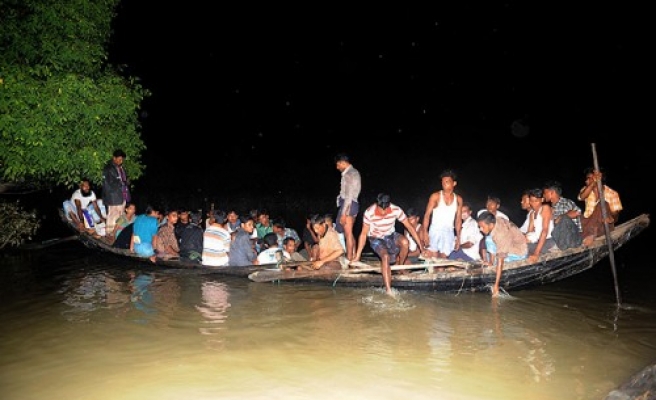 Thousands of Rohingya boat people who have left Myanmar in the past month have yet to reach their destinations, say relatives and an advocacy group for the persecuted minority, raising fears their boats have been prevented from reaching shore.

About 12,000 Rohingya, a mostly stateless Muslim people, have left the western Myanmar state of Rakhine since Oct. 15, said Chris Lewa of the Arakan Project, which plots migration across the Bay of Bengal.

Another 4,000 boat people, both Rohingya and Bangladeshis, left neighbouring Bangladesh during the same period, said Lewa.

The boat people are headed for Malaysia, but most transit through Thailand, where smugglers and traffickers hold them at jungle camps near the Malaysian border until relatives pay ransoms to secure their release.

About 460 boat people were found and detained by the Thai authorities in November, but thousands more have not made landfall or contacted relatives after what is usually a five-day voyage.

"Where are they?" said Lewa. "We have become very concerned."

The last time so many boat people went missing was in 2008, said Lewa. Hundreds of Rohingya, many of them starving and dehydrated, were later rescued from Indonesian and Indian waters, while others were feared lost at sea.

Thailand's prime minister later said there were "some instances" in which Rohingya boats had been pushed out to sea to "let these people drift to other shores", but that they had adequate food and water.

Tens of thousands of Rohingya Muslims were displaced in 2012 after deadly attacks by Buddhists in Myanmar's Rakhine State. Many Rohingya now live in squalid camps with little or no access to jobs, healthcare or education.

Prejudice against the minority group is widespread in Myanmar, which says they have no right to citizenship, despite having lived in the area for generations.

On Friday, U.S. President Barack Obama stepped up international criticism of such discrimination and called on Myanmar to grant them equal rights.

Two senior Thai military officials told Reuters that measures were in place to deter boats from coming near the country's shores.

Banpot Phunpian, spokesman for the Internal Security Operations Command (ISOC), said its army officers were trained to warn boats and their crews not to anchor near Thailand's coast and that Thailand had a right to block boats in seas it patrols.

"If people are trying to come into our country illegally, do we have a right to block? If they are in the sea area that we patrol we can stop them from coming in," said Banpot.

The boat people who left Myanmar in the past month might be "hiding on islands near Thailand", fearful that authorities are getting tough on illegal migrants, he said.

Thailand's territorial sea extends up to 12 nautical miles from the coast, according to ISOC and the Royal Thai Navy.

Navy spokesman Rear Admiral Kan Deeubol said he was unsure whether a "push back" policy was still in effect, but added that Thailand had a right to interdict illegal boats.

Sajeda, 32, lives in Thae Chaung, a once-sleepy fishing village near the Rakhine capital Sittwe that has become a teeming camp for Rohingya displaced in 2012.

She said goodbye to her 13-year-old son Mubarek on Oct. 18. He then boarded a fishing boat with 62 other Rohingya, among them woman with young children hoping to reunite with husbands in Malaysia.

The boat set sail for a larger people-smuggling ship moored far offshore, waiting to sail across the Bay of Bengal.

Sajeda, who uses only one name, has heard no news from Mubarek. "I'm going crazy with worry," she said.

Concern about the fate of the boat people appears to have slowed but not halted the exodus from Myanmar.

Reuters witnessed Rohingya gathering to board a boat at Ohn Taw Gyi village, not far from Thae Chaung, and learned that at least one other boat had departed in the previous two weeks.