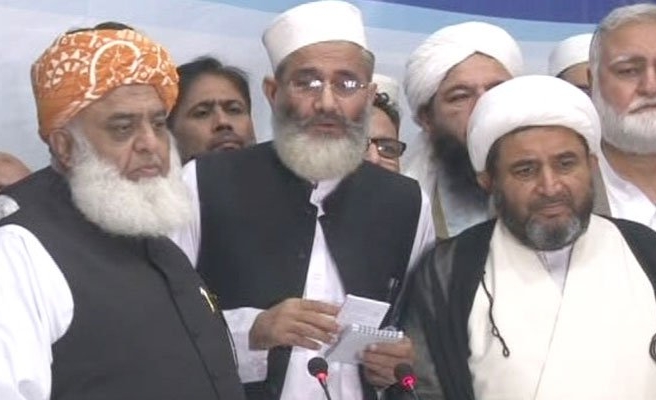 Six religious political parties in Pakistan have agreed to restore the former alliance of Muttahida Majlis-i-Amal (MMA) ahead of next year's general election, the chief of Jamaat-e-Islami Pakistan, a major political party, said on Friday.

The decision was made at a meeting at Mansoora, the headquarters of Jamaat-e-Islami in the eastern city of Lahore on Thursday evening.

All heads of religious parties have agreed to revive the MMA but the formal announcement will be made in December after a final meeting in Karachi, Senator Sirajul Haq said.

"We want to bring all religious groups together in one platform, and therefore we have constituted a committee to meet with all other small groups and hopefully finally will announce the alliance next month," he added.

Qazi Hussain Ahmad, the late and former chief of Jamaat-e-Islami, formed the Muttahida Majlis-i-Amal in 2002, in opposition to the then President Pervez Musharraf's policies to support the U.S. war in Afghanistan.

The alliance had contested the 2002 general election and secured majority seats in the provincial assemblies of northwestern Khyber–Pakhtunkhwa, formerly the North-West Frontier Province, and southwestern Balochistan provinces, becoming a major opposition group in the National Assembly.

The alliance fell apart in 2007 when Qazi Hussain Ahmad announced to boycott the 2008 general election and all other parties followed suit except for Maulana Fazlur Rahman, chief of Jamiat Ulama-e-Islam, who went on to take part in the election and became part of then Pakistan People's Party-led government.