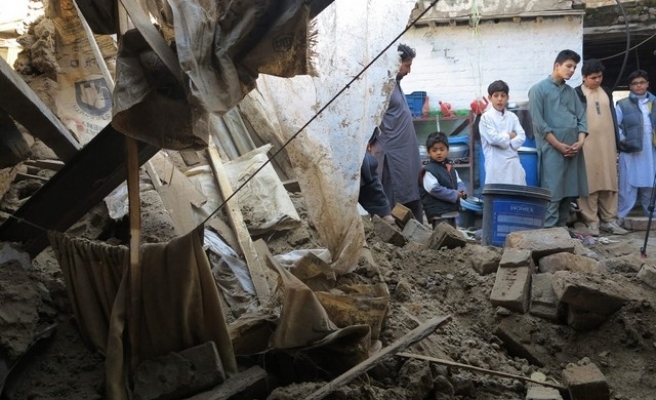 Rescuers raced against time Wednesday to reach cold and hungry survivors of an earthquake that left entire communities in Afghanistan and Pakistan marooned in remote mountainous regions, as the death toll climbed to 370.

Desperate victims appealed for blankets, warm clothes and food after the quake levelled thousands of homes, forcing many to camp out in the open in freezing weather.

"No one came to help us. We are sitting in open area. There was rain yesterday and no one came to help us," said Jamil Khan, a 24-year-old quake victim in Shangla, one of the worst-hit districts of Pakistan's northwestern province of Khyber Pakhtunkhwa.

Pakistan's confirmed death toll stood at 255 with nearly 1,700 people injured, and authorities warn that the number could spike with many isolated regions still cut off.

People were reported to be running out of food in many remote areas, with children and the elderly helping to dig through piles of rubble for survivors as they waited for aid to arrive.

"We lost everything. We could not save anything," said another Shangla resident, 60-year-old Hakim Khan, adding that the only thing they had been able to retrieve from the rubble was the body of a boy.

Speaking during a trip to Khyber Pakhtunkhwa, which has seen the bulk of the casualties so far, Prime Minister Nawaz Sharif on Tuesday pledged compensation for those whose homes have been destroyed.

The military has been leading Pakistan's rescue efforts, sending in medical teams, tents and rations and evacuating some people by helicopter.

"Shelter and hygiene will be most likely the main needs, as it is already snowing in some of the more mountainous areas," said Shelagh Woods, country representative for medical charity MSF in Pakistan.

Afghan officials said 115 people were confirmed dead and hundreds more injured, with casualties reported from around half a dozen of the country's 34 provinces, and more than 7,600 homes reported damaged.

Desperate survivors were left marooned on mountaintops in Badakhshan, the remote province where the epicentre was located, but Western charities said the Taliban presence there and in other quake-stricken areas was hindering relief efforts.

The insurgents on Tuesday urged aid organisations not to delay in delivering relief, and vowed their fighters would provide "complete help" in affected areas.

But there was no let-up in fighting despite those assurances.

The militants on Wednesday claimed to have overrun the remote district of Darqad in the quake-hit northern province of Takhar, underscoring the fragile security situation facing relief workers.

"What is most needed at this stage is medical assistance to the injured, medical equipment and shelter for the affected populations," said Kjersti Haraldseide, acting country director for Afghanistan for the Norwegian Refugee Council agency.

Antoine Sagot-Priez, country head of French aid agency Premiere Urgence Internationale, said they had already seen a "large influx of casualties" at one of their hospitals in the badly hit Afghan province of Kunar.

Mass burials were being conducted across the country, including those of 12 Afghan schoolgirls who were trampled to death as they rushed to escape their classrooms in Takhar province when the quake struck.

Flag-draped coffins arrived at a local cemetery on Tuesday as tearful relatives of the girls gathered for mass burials. Some of the survivors were flown by military helicopter to Kabul for treatment.

The World Health Organization said it has distributed medical supplies to help thousands of victims and more trauma kits for 1,200 patients would be sent in the coming days.

The quake was centred near Jurm in northeast Afghanistan, 250 kilometres (160 miles) from the capital Kabul and at a depth of 213.5 kilometres, the US Geological Survey said.

The devastation comes six months after a huge earthquake in Nepal and an aftershock killed almost 9,000 people.

Aid agencies have stressed the need for greater disaster preparedness in war-torn Afghanistan, which remains extremely susceptible to recurring natural disasters such as floods, earthquakes and landslides.

But disaster planning has been a low priority for the nation struggling to end a 14-year war against the Taliban insurgents.

Critics in Pakistan said authorities have still not learnt from the catastrophic quake of October 2005, which killed more than 75,000 people and displacing some 3.5 million.

"We know we are in an earthquake-prone zone," said an editorial in The News daily, stressing the need for greater preparedness.

"A failure to act now will be deadly in the future."