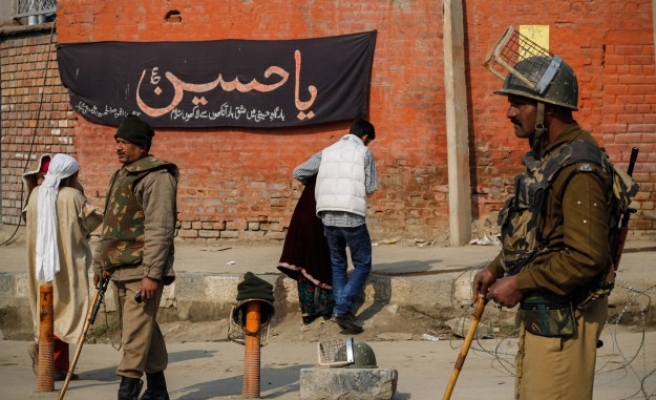 Indian Prime Minister Narendra Modi on Monday took his political campaign to the troubled occupied Kashmir, promising jobs and water supplies to win support in a region at the heart of nearly seven decades of hostility with Pakistan.

Modi's Bharatiya Janata Party is making a bold attempt to win power in a state election under way in Muslim-majority Kashmir and bring it closer to the Indian mainstream, a long-running goal of the right-wing party.

But the BJP's "Mission Kashmir" has already raised tension, with political rivals and independence activists accusing the party of fomenting divisions in the region, which includes Hindu-dominated Jammu and Buddhist Ladakh.

Tens of thousands of people applauded Modi as he promised the fruits of development if his party won the mandate to rule the state, weary of years of strife.

"People want jobs for the youth, water for the farms, medicines for the elders," he said. "Even those who have strayed and taken up the gun are feeling burdened by it."

Modi's harder test was in Srinagar, the state's summer capital, which is at the heart of the 25-year resistance against Indian rule.

Modi promised to help rebuild Srinagar and nearby areas that suffered the worst flooding this year in more than a century. He said he had turned Kutch in his native western state of Gujarat into India's fastest growing district after a devastating earthquake in 2001.

A day before Modi's visit for his first ever rally, Srinagar has been turned into a garrison with tens of hundreds of soldiers and policemen manning the streets and frisking almost every vehicle and passerby.

Srinagar's roads have been dotted with dozens of mobile checkpoints and barbed wire lay sprawled in scores of areas.

"In 16 kilometers, my car has been checked seven times and I have been frisked six times, and I am not even going toward (the rally’s venue). I hope tomorrow ends quickly so that we don't have to suffer more like this," Rohail Ahmad Wasti, a medical representative, told AA.

About 3,000 paramilitary troops and sniffer dogs guarded a cricket stadium where he is due to speak.

"The security grid is in place," an army official, Lieutenant-General Subrata Saha, told reporters. "It won't be appropriate for me to say anything more than that."

The BJP has long pushed for an end to Kashmir's special status under the Indian constitution. Pakistan says the election is meaningless and instead calls for talks to resolve a dispute that has poisoned ties between the neighbours ever since independence from Britain in 1947.

Days before the rally, the surprise checks on the city roads by the Indian armed forces had intensified and on Sunday, almost everyone who drove through Srinigar was frisked multiple times.

According to police in the Indian-held Kashmir, or IHK, 50 companies of armed personnel including the Indian Reserve Police have been deployed for Monday’s rally.

The Indian Army not to be part of the security apparatus in Srinagar, but it has been deployed around the capital as vehicles coming in from various districts are being searched at army checkpoints.

Army officials also told the press that there would be surveillance by choppers.

Indian PM Modi had already come to Srinagar in 1990, at the beginning of the popular pro-independence militancy, as a junior leader of his party, along with then-party president, Murli Manohar Joshi, to hoist the Indian flag amid a curfew and heavy presence of Indian armed forces.

Since 1989, Kashmiri resistance groups in the region have been fighting against Indian rule for independence, or for unification with neighboring Pakistan.