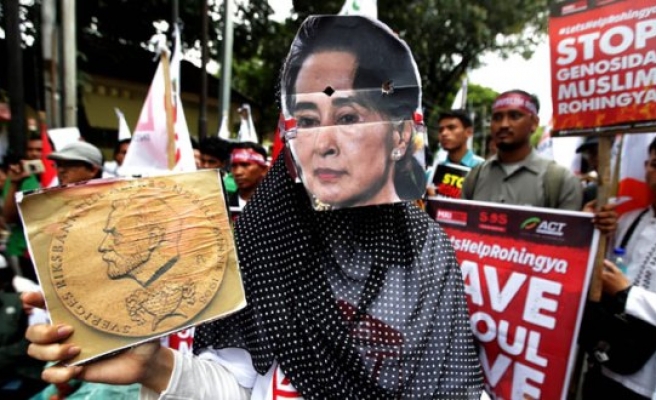 A Europe-based Rohingya group said Friday that Aung San Suu Kyi, state counsellor for Myanmar and Nobel Laureate, is supporting the "genocide" of Rohingya Muslims in her country.

Hla Kyaw, head of the European Rohingya Council, told Anadolu Agency in Ankara that Suu Kyi sits and watches, as “the army continues to burn houses and villages” in Myanmar’s western Rakhine state.

Kyaw said the de-facto leader is "not only complicit [in] the genocide, she is [also] a partner in genocide."

Suu Kyi has been under international pressure for being silent in the face of the latest atrocities in Rakhine state which, according to the UN, has forced around 400,000 people to flee to Bangladesh.

On Friday, UNICEF spokeswoman Marixie Mercado said 36,000 Rohingya babies below one year old and 92,000 children below the age of five had arrived in Bangladesh.

The refugees are fleeing a fresh security operation in which security forces and Buddhist mobs have killed men, women and children, looted homes and torched Rohingya villages.

According to Bangladesh's government, around 3,000 Rohingya have been killed in the crackdown.

Kyaw said that the Rohingya community had supported Suu Kyi when she was put under house arrest by the military junta of Myanmar, during a greater part of the period between 1989 and 2010 -- something that made her an international symbol of peace and resistance.