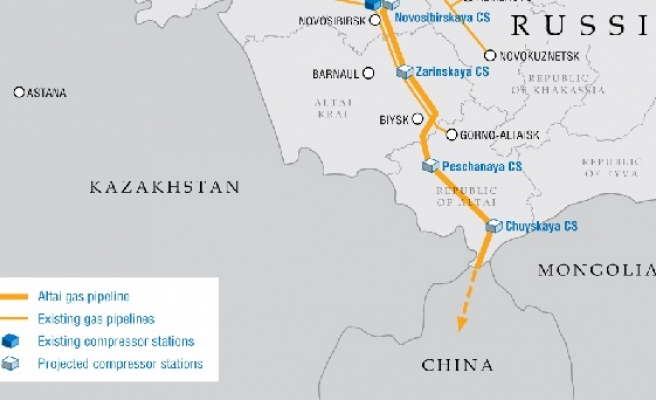 The proposed Altai natural gas pipeline project could ease the effects of western sanctions on the Russian economy, while China could gain from cheaper gas prices to meet its energy demand, experts said.

The Altai gas pipeline has been the subject of intergovernmental talks between Russia and China since 2006.

When the two countries could not agree on the price of gas in 2008, the project was indefinitely postponed. However, when the $400 billion agreement for the 'Power of Siberia' gas pipeline project was signed between Russia and China in May 2014, the Altai project came back onto the agenda once again and an agreement is expected to be signed this November.

"I believe China is also taking advantage of the circumstances Moscow is facing with regards to Ukraine and Western reprisals," he added.

Due to the unrest in Ukraine and pro-Russian influence in Crimea, the western countries imposed sanctions on Russia which prevent its companies seeking financial investment from western banks and institutions.

Sijbren de Jong, an expert on energy security and natural resources at The Hague Centre for Strategic Studies, a think-tank based in the Netherlands, said: "Gazprom - the Russian gas company- is in a legal squeeze in Europe. So, with the European market under stress, Russia is keen to diversify its gas exports to China."

The Altai gas pipeline, if built, would carry natural gas from Russia's western Siberia to northwestern China, where the population is sparse.

"China is not going to be willing to pay a premium price for the gas, since the pipeline would end up in China's western most regions, where barely a soul lives. China also paid a price much lower than that of Western consumers in the deal concluded last May," said de Jong.

"Russia basically shot itself in the foot by agreeing to such a low price for the pipeline gas in the May deal, while China secured a long-term supply of gas at about $350 per thousand cubic meters. This is much below the European price of around $380," he added.

However, Lean believes that the pipeline may usher progress for the region as he said the pipeline serves as a means of helping facilitate China’s energy diversification process and the socioeconomic development of China’s northwest.

Another issue Russia faces is its limited capabilities to finance the Altai project under the shadow of the western sanctions that prevent it seeking investment in the west.

"The Altai pipeline is going to need serious investment and it is unclear where Gazprom will find the necessary billions, seen as access to the U.S. and EU capital markets is heavily restricted," said de Jong.

It still remains a question whether Russia will acquire the share it desires from China's gas demand as the Asian market is expected to generate increased competition by 2018, when the first gas deliveries of the Power of Siberia project reach China.

According to de Jong, gas prices will begin to drop in 2018, and there will be fierce competition between Australia, the U.S. and Qatar who will provide liquefied natural gas (LNG) to Asia while Russia and Turkmenistan will provide gas via pipelines to China.