Russia and Japan continue 70 year dispute over the Kuril islands, which has continued to hamper trade between both countries. 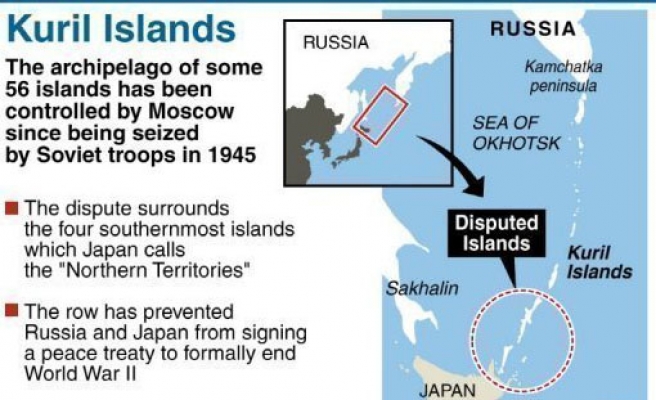 Russian Prime Minister Dmitry Medvedev landed Saturday in the Kuril islands, prompting a swift rebuke from Tokyo, which claims sovereignty over the northwest Pacific archipelago in a long-running dispute.

Medvedev visited Iturup, one of four islands in the chain that lies off Russia's far eastern coast and just north of Japan, Russian media reports said.

"Everything is perfectly modern here," Medvedev was quoted as saying on his arrival.

"This is the result of our development programme for the Kuril islands."

Hajime Hayashi, the head of the Japanese foreign ministry's European division, phoned the Russian ambassador in Tokyo over the visit to the islands, which Japan calls the Northern Territories.

The trip "contradicts Japan's position over the Northern Territories and hurts the feelings of the Japanese people... It is extremely regrettable", Hayashi said, quoted by a Japanese foreign ministry official.

The seven-decade-old dispute has hampered trade and prevented Moscow and Tokyo from signing a formal post-war peace treaty.

Both the Kremlin and Japanese Prime Minister Shinzo Abe had hoped to start mending relations in order to revive trade, with Japan seeking broader access to Russia's plentiful oil and natural gas supplies.

According to the government's website, Medvedev visited the island's new airport, sea port, a fish processing factory, and a youth forum where he met with young scientists and teachers.

He and the forum participants took selfies and unfurled a giant Russian flag on the island's shore for a group picture to mark Russia's flag day, according to Medvedev's Instagram account.

"At the Kurils on Russia's State Flag day," the picture was captioned.

He went to the Kurils after making an official visit to Russia's Far East region of Amur, where he visited a space port being built in Vostochny.

The cosmodrome is designed to ease Russia's dependence on space launches in Baikonur, in Kazakhstan.

Medvedev visited the islands in 2012, and Russia held military exercises there in 2014. Both incidents provoked protests from Tokyo.