Because of Russia's information law, the Russian version of online encyclopedia Wikipedia was closed today. 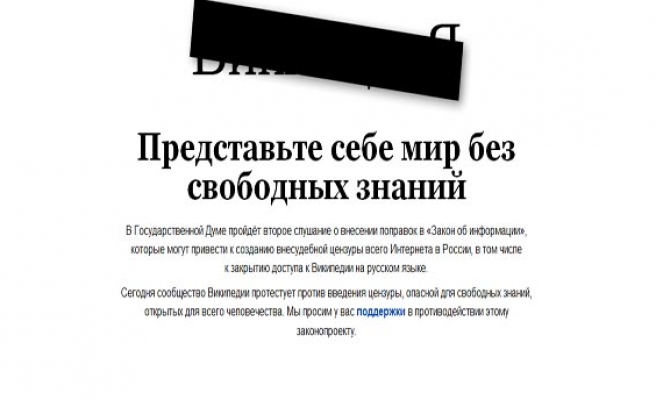 The Russian version of online encyclopedia Wikipedia closed its site on Tuesday in a one-day protest against what it said were plans by President Vladimir Putin to create his own version of the "Great Chinese Firewall" to block dissent on the Internet.

Supporters of amendments to Russia's information law, which were proposed by the ruling United Russia party and will be discussed in parliament on Wednesday, say changes are needed to protect children from harmful sites.

But leaders of anti-Putin protests say the new law could shut down websites in Russia such as Facebook and Twitter without a court order and is meant to stop their opposition movement, which is organized via social networking sites.

"These amendments may become a basis for real censorship on the Internet - forming a list of forbidden sites and IP addresses," Russian Wikipedia said in a statement.

"The following provisions and wording undertaken for discussion would lead to the creation of a Russian equivalent of the 'Great Chinese Firewall' ... in which access to Wikipedia could soon be closed across the entire country."

The changes to the information law would give government officials power to request the closure of Internet pages without a court order simply by blacklisting them. China has some of the most effective methods of blocking dissent on the Internet, tightly controlling what can and cannot be viewed.

"This is basically an attempt to infiltrate the opposition's last bastion - the Internet. It's an attempt to kill the protest movement which depends on the Internet. To me it spells out 'China' which looks like the direction in which we're heading," said opposition activist Natalia Pelevine.

Since Putin returned to the presidency in May after four years as premier, parliament has rushed through legislation increasing fines for protesters who step out of line and is considering tighter rules for non-government organizations.

The opposition says the proposed changes in the law, and recent raids on the homes of protest organizers, are intended to stifle protests against Putin. The Kremlin denies this.

Internet sites provided the main platform for videos and photographs from bloggers illustrating alleged fraud in the December 4 election which gave Putin's United Russia party a majority in the State Duma lower house.

Russians see both houses of the legislative body as offering only token debate before bills are rubber stamped into law.

"Any attempt to ban vaguely defined Internet content in a non-transparent manner will almost certainly lead to over-blocking and possibly censorship," Mijatović wrote in a letter to Foreign Minister Sergey Lavrov and State Duma Chairman Sergei Naryshkin, the OSCE said.

Putin is widely seen as less enamoured of the Internet than his tech-savvy predecessor as president, Dmitry Medvedev. The chief of Russia's Security Council has said foreign-based websites are being used to foment anti-Kremlin protests.