Before floods ploughed through Pakistan nearly two weeks ago, it was easy to get to a nearby hospital for help. 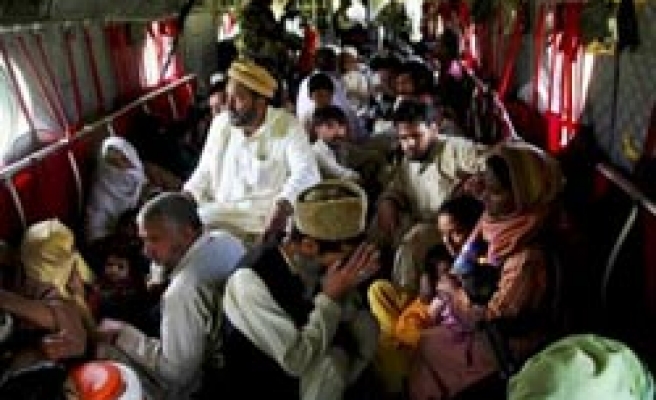 If Mrs Waheed's heart problems flare, there is only one way to get proper medical treatment. She would have to hike for hours through mountain terrain to the nearest hospital.

Before floods ploughed through Pakistan nearly two weeks ago, it was easy to get to a nearby hospital for help.

Then the 80-bed government facility -- which serviced several towns and villages -- was swept away in raging waters that caused some of the worst devastation in Pakistan in decades.

Bridges have collapsed and roads torn up in many towns like Madain in the Swat valley, where charities and Pakistani soldiers have had to travel by foot or use mules to reach about one million people who were cut off from supplies.

"There is no ECG (electrocardiogram) machine to check my heart. I can't walk through these rough trails to find a hospital," said the grandmother, crying while sitting on a cloth on a cement floor at a school turned makeshift clinic.

"Maybe I will die. They can't care for me here."

The floods have killed more than 1,600 people, forced 2 million from their homes and disrupted the lives of about 14 million people, or 8 percent of the population.

The catastrophe has overwhelmed the government, heavily criticised for its sluggish response. Entire villages have been wiped out -- medical facilities, schools, homes, farms.

Pakistanis have had to improvise to cope.

Doctors try to make the best out of the boys' school. With no beds, patients lie on mats. Those awaiting treatment sit on desks.

They can only hope there are no emergencies.

"We only have medicines to treat headaches or stomach problems. We can't handle any crises, like delivering a child," said Dr Israr Ahmed, treating 12 people who had managed to reach the school on high ground as the floods struck.

One of Saleem Jan's nephews carried him on his back for a kilometre (half a mile) to the school. The 70-year-old man complains of back pain and headaches.

"We need the government to rebuild our roads so we can get medical attention," he said.

Repairing towns like Madain is likely to cut into strategic spending that was planned to create better services and jobs and boost security forces to prevent Taliban militants from returning to their former Swat stronghold and recruiting people who lose faith in the state.

"First these people faced the Taliban and now they have seen floods. They are depressed," said Ahmed.

"I am prescribing tranquillisers to some of them so that they get some relief."