Seljuks on the Baltic: Polish-Lithuanian Muslims in the Ottoman Empire

Polish-Lithuanian Muslims des rather from the noble and valiant line of the Seljuks, the ancestors of the Ottomans. Their “Risâle-i Tatar-i Leh” (Polish Tatar Account) was composed with the help of scholars from the Ottoman court and attempted to address the problems of a Muslim people that chose to settle in non-Muslim lands. 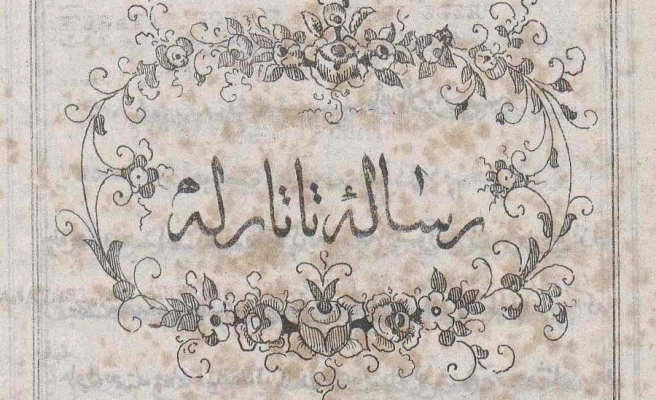 In 1558 three Muslims from Poland-Lithuania left their homes and set out on hajj. Their journey to the holy cities of Mecca and Medina took them south to Istanbul where they were approached by Grand Vizier Rüstem Pasha and asked to write an account of the history and condition of the Muslim community in Poland-Lithuania for Sultan Süleyman I. As one of the largest integrated, legally protected Muslim populations living in Christian Europe during the early modern period, Poland-Lithuania’s Muslims, called “Lipka Tatars” in later times, had a unique relationship with the most proximate and powerful Muslim power, the Ottoman Empire. The “Risâle-i Tatar-i Leh” (Polish Tatar Account) was composed with the help of scholars from the Ottoman court and attempted to address the problems of a Muslim people that chose to settle in non-Muslim lands and that were compelled by historical legal and social obligations to fight for Christian princes, at times against their fellow Muslims.

With the help of their Ottoman ulema redactors, the Polish-Lithuanian Muslim authors of the Risâle developed a legitimizing historical narrative of their own settlement that was grounded in contemporary sensibilities of the Ottoman court. Gâza, millenarianism, and a fascinating hybridization of Polish/Ottoman historical myths of origin were employed in order to deny the Tatar ancestry of Poland-Lithuania’s Muslim nobility in favor of a dual Chingissid/Seljuk heritage linking them directly to the Ottoman dynasty and other powerful Islamic regimes. The ultimate solution to the separation of Poland-Lithuania’s Muslims from the dar al-Islam, and more immediately the immoral conflict between Muslims that occurred whenever Poland-Lithuania and the Ottoman Empire were at war, was for Süleyman to extend his shadow to the north and conquer Lehistan.

Muslims began to settle in the Grand Duchy of Lithuania and Kingdom of Poland before the reign of Osman I (1258-1326), the progenitor of the Ottoman dynasty, and continued to do so throughout the early modern period. Most came during times of conflict within the Golden Horde and its successor state, the Crimean Khanate, though Muslim prisoners of war were also forcibly settled. Rights to land and other privileges were given in exchange for military service, leading to the stratification of Muslim society between noble and non-noble populations. In the late 14th century Catholic Poland and pagan Lithuania were joined in a personal union under the newly baptized Lithuanian monarchs.

The authors of the Risâle described early Muslim settlement under pagan Lithuanian Grand Dukes in the 14th century as a form of gâza, or holy war aimed at the spread of Islam. Rather than betraying the directives of their faith for personal gain or security, the renegade settlers coming from the Hordes were in fact expanding the bounds of the Islamic world. For the audience of the Risâle, gâza was a powerful ideological tool used to legitimize the sovereignty of the Ottoman dynasty and an integral unifying factor for the orthodox Sunni military class of the Ottoman society. Further explanation offered for the settlers’ choice to align themselves with non-Muslim rulers was the high regard of Lithuanian and Polish leaders for the martial prowess of Muslim warriors as well as for the Islamic faith itself. Though they may have been unbelievers, the Risâle consistently portrays the monarchs of Poland-Lithuania as righteous leaders that respected to manifest superiority of the Islamic faith.

Foremost amongst these historical non-Muslim sovereigns mentioned in the Risâle was the pagan Grand Duke Vitold (1350-1430), who is portrayed as a saint-like figure venerated by Polish-Lithuanian Muslims. “The name of the king, who was like a pillar supporting Islam in the lands of the infidels [gâvur], is Vitold, whose memory is preserved up to our present age, as every year there is a day reserved to memorialize this king. Muslims living in this country gather in temples on this day and his name is recalled with reverence.” The details of this unusual ritual, memorializing a pagan convert to Latin Christianity, are unknown. Despite the alleged magnanimity of Vitold, the choice of the Polish-Lithuanian Muslim authors’ ancestors to settle in the land of the unbelievers caused them some remorse; “Our ancestors, always longed for those countries where our faith and our customs have a blissful abode. They were resigned, however, to their existence, and willingly surrendered to God’s purpose.”

The authors of the Risâle invoked the “Sarmatian” myth of origin of the Polish-Lithuanian noble estate alongside a parallel myth linking local Muslim nobles to both the Seljuk Turks and Genghis Khan. The Risâle informed the Ottoman court that the Lehs (Poles) “descend from a warlike nation in ancient times, from which they derive valor and strength. In fact, they are valiant in war, and the greater part of their people have a brave demeanor, full of life and movement, and when you see one on a horse you will think that you see a resident of the blessed realms of the Prophet.” By incorporating the Sarmatian narrative in their description of Lehistan (Poland), the Risâle’s authors reinforced the Polish-Lithuanian nobility’s belief in a common descent, as an estate, from Sarmatian tribes inhabiting the Pontic Steppe in antiquity. Sarmatism manifested in a powerful unifying ethos expressed through normative cultural practice amongst the multi-confessional Christian nobility, regardless of individual geographical/ethnic identities, reinforcing a sense of equality through mythological lineage and the legitimate leadership of the nobility vis-à-vis the peasantry and urban populations.

It is evident that the Polish Lithuanian co-authors of the Risâle, who were very likely Muslim noblemen, had internalized the Sarmatian myth. They could not, however, partake in it directly. The social stratification of Polish-Lithuanian society created clear distinctions between noble and non-noble Muslims. Noble Muslims were not included within the “Sarmatian nation”. "Tatars" were thought by Poles to descend from the Scythians, another steppe culture of antiquity. The authors of the Risâle developed a parallel myth of origin for Muslim nobility that claimed both Seljuk and Chinggisid origins for the Muslim nobility of Poland-Lithuania. The text informs its readers that the ennobled portion of the Muslim population of Poland-Lithuania were not Tatars at all; “in this country they call us Tatars, though the bulk of us do not come from those ruffians, who are always held in the greatest contempt by Muslims, but rather from the noble and valiant line of the Seljuks, the ancestors of the Ottomans.” This alleged relation to the Seljuk Turks created a de-facto kinship with the Ottoman dynasty, binding them to a historical narrative that lay at the root of Ottoman sovereignty.

Non-noble urban Muslims of Poland-Lithuania, on the other hand, were described as descending from common Tatars of the Hordes. The authors’ distaste for Tatars was linked to the unsettled lifestyle of contemporary Tatars of the Crimean Khanate and Hordes; “we neither camp in tents, nor do we wander the steppes. But in (Lehistan) it is all the same; if someone professes a faith other than that of the idolaters [mushrık], they call him a Tatar”. It should be noted that, aside from this text, there is no historical record indicating that Polish-Lithuanian Muslims claimed Seljuk descent.

The alleged Seljuk patrimony of Muslim nobles of Poland-Lithuania was further elevated by emphasizing historical familial connections to Chinggisid Khans Jochi, Batu, and Tokhtamish. Unlike the Seljuk myth, there were Chinggisids amongst Polish-Lithuanian Muslims. Chinggisid descent was a legitimizing narrative supporting the rule of numerous dynasties in the Muslim world, including the Ottomans vassal Giray Khans of the Crimea. This was well known in the 16th century, as the Girays owed their power, in part, to Lithuanian patronage and support during the wars of succession that began their reign, and which witnessed a wave of Muslim settlement in Lithuania.

For the authors of the Risâle, the ultimate solution to the problematic status of Polish-Lithuanian Muslims, bound as they were to fight fellow Sunni Muslims at the command of their Christian monarchs, was for Süleyman I to conquer and convert Lehistan. In the first half of Süleyman’s rule, both in popular and elite circles, there arose a powerful eschatological notion of Ottoman sovereignty linked to the impending close of the first millennium of the Islamic world and the spread of the Islamic world under Selim I and Süleyman I. The authors of the Risâle-i Tatar-i Leh partook in this narrative by using titles such as zul karneyn (Alexandrine world conqueror) and the notion that the Sultan was the żill Allâh (shadow of God on earth). While the authors of the Risâle did not seek to create an explicit relationship of patronage between Süleyman I and the Muslim population of Poland-Lithuania, they implied that it was the Sultan’s responsibility and fate to conquer Poland-Lithuania and bring the local Muslim population back into the fold.

The authors indicated that the multi-confessional and relatively tolerant nature of Polish-Lithuanian society would fascilitate the spread of Islam in those lands. “If there were more frequent relations with the Sublim Porte, it may ensure that the Islamic faith would spread in those lands... From (Lehistan) it is apparent that there is no similar country where there might be so many ways to praise Allah. Here there is no faith that may have any aparent advantage over the others, and elsewhere amongst the infidels it is forbidden that Muslims settle and live.”

Regardless of the sincerity of this request, posed as it was by unknown members of a rather famously tolerated and loyal European Muslim minority community whose descendents still exist today, the Risâle-i Tatar-i Leh provides an opportunity for Ottomanists to reconsider the political and social influence that the Ottoman Empire exerted on neighboring European societies. The Polish-Lithuanian Muslim community may have been the largest in Christian Europe by the mid-16th century, and yet we know very little about their relationship with the Ottoman state. Amidst inventive settlement narratives and myths of origin, it is clear that the authors’ vision of the Ottoman Sultan’s role in the lives of Polish-Lithuania Muslims was not purely aspirational; it was critical to the immediate endeavor of the hajji authors. While the Padishah may not have been the Polish-Lithuanian Muslims’ legal sovereign, he exercised ultimate control over their ability to perform a critical obligation of their faith; “to kiss the Ka’aba and see the grave of the Prophet.” The Risâle therefore sought to affirm the sanctity of Süleyman’s supremacy over the entire world, and in particular his role as protector of all Muslims, partly legitimized by his title as Khalif and fascilitation of the hajj. It is clear that without the Sultan’s generosity, clemency, and patronage during the hajj, the Muslim community of Poland-Lithuania could never hope to fulfill the duties that were central to their Islamic faith.