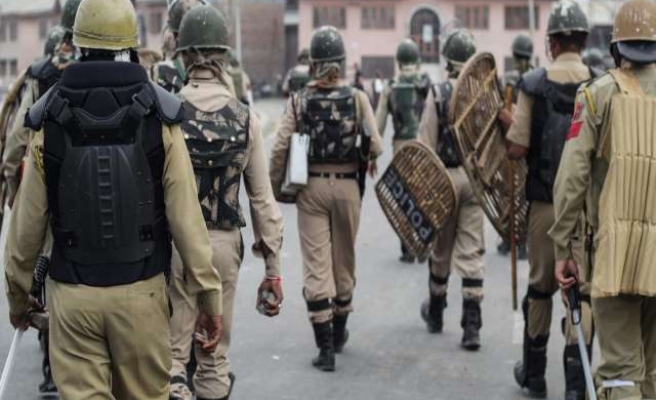 The soldiers not only staged the killings, but later also claimed rewards and remunerations for the act by declaring the slain Kashmiri civilians as foreign militants in Indian-held Kashmir in 2010.

The Indian military court had tried the seven army personnel for four years before convicting them. The punishment includes suspension of service benefits of the seven convicts.

“The Indian solders instead took them to Macchil area in Kashmir’s border district of Kupwara and staged a fake gun battle, and showed our children as foreign militants,” Naseema Bano, mother of slain Riyaz Ahmad Lone told Anadolu Agency.

The Indian soldiers had also disfigured the corpses by applying black paint to the clean shaven faces of the slain civilians; dressed the bodies in militia fatigues and put weapons on them.

The staged killings came to be known locally as the Macchil fake-encounter case and became one of the key reasons for the mass protests in Indian-held Kashmir in 2010.

The protests saw hundreds of thousands of Kashmiris coming out on the streets demanding independence from India. More than 120 civilians were killed by the Indian police during the protests that saw Indian-held Kashmir reeling under months-long curfew.

Later, police had registered a case under pressure and charged 11 men, including a surrendered militant in the case.

“It is a watershed moment. No one in Kashmir ever believed that justice would be done in such cases. Faith in institutions disappeared. I hope that we never see such Machhil fake encounter type of incidents ever again and let this serve as a warning to those tempted to try,” Abdullah tweeted.

“What is there to welcome? Every village and town in Kashmir is littered with fake encounters by the Indian army and not one solider has been punished in all those cases…Indian institutions have never been able to give justice to Kashmir,” senior Hurriyat leader Syed Ali Shah Geelani said.

Families of the slain Kashmiris said the only justice in the case would have been “an eye for an eye.”

“It was not that they killed my son by accident or in a fight or something, but it was a premeditated murder, and who knows how many Kashmiris like my son they murdered before this. They should have been hanged…this is no justice,” Bano added.

Since 1989, Kashmiri resistance groups in Indian-held Kashmir have been fighting against Indian rule for independence.