Police described the blasts, which injured 51 people on the eve of China's national day, as a 'criminal case', ruling out a 'terrorist act' 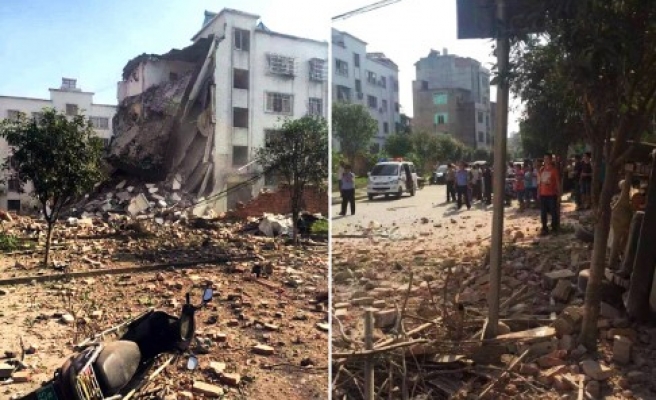 Police described the blasts, which injured 51 people on the eve of China's national day, as a "criminal case", ruling out a "terrorist act".

They said a 33-year-old local suspect had been identified but gave no immediate motive and were seeking his arrest.

The explosions occurred in at least 13 locations in the rural county of Liucheng in the Guangxi region, the Nanguo Morning News, a local newspaper, cited police as saying.

They included a prison, a government office and a shopping centre, it said.

Pictures posted online, which could not be verified, showed portions of six-storey buildings gutted and collapsed, and streets littered with glass, bricks and other debris.

Other photos showed overturned cars, victims bandaged and laid on makeshift stretchers and plumes of grey smoke rising above a residential district.

"The public security department has quickly started to work and has already determined it was a criminal case," it quoted Liucheng police as saying.

A "preliminary suspect" was named as M. Wei, aged 33 and living in the town of Dapu in the county.

"Currently, public security organisations are sparing no efforts to carry out investigation work," it added.

Liucheng county is under the administration of the city of Liuzhou.

In recent years several disgruntled Chinese citizens have bombed local government offices and public places to try to draw attention to their grievances.

In 2013 a man set off a series of home-made bombs packed with ball-bearings outside a provincial government headquarters in northern China, killing at least one person and wounding eight.

Xinhua said at the time he sought to "take revenge on society".

The same year a street vendor set fire to a bus in east China's Fujian province, killing himself and nearly four dozen passengers in an act of retaliation against local authorities.

Legal paths for pursuing justice in China are limited, as courts are subject to political influence and corruption. Citizens who lodge complaints against authorities often find themselves being detained.