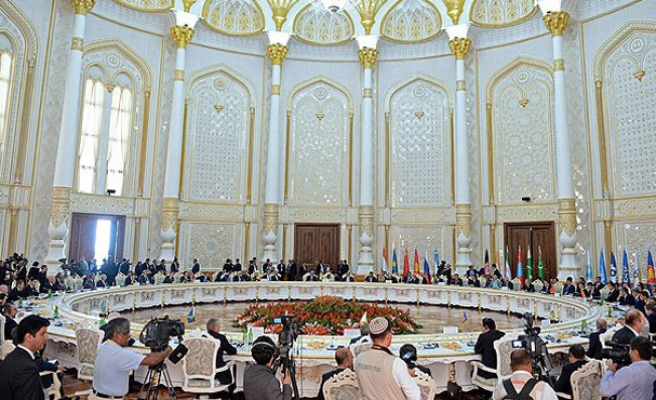 The heads of the Shanghai Cooperation Organization member states said in a joint statement Friday that the Syrian conflict could only be resolved through diplomatic efforts as well as dialogue between fighting sides.

The joint declaration - signed by the leaders of China, Kazakhstan, Kyrgyzstan, Russia, Tajikistan and Uzbekistan - stressed that the organization respects the territorial integrity and sovereignty of Syria, which has been gripped by a civil war since March 2011.

A recent United Nations report said more than 191,000 people are believed to have been killed in the conflict.

On the last day of the organization’s two-day summit in the Tajik capital of Dushanbe, the group's leaders also said negotiations to find a resolution to the unrest in Ukraine should continue.

Russian President Vladimir Putin said that the member states had discussed important issues on the global agenda including the tension in Ukraine, adding that their approaches regarding cooperation were “identical or close."

Meanwhile, Emomali Rahmon, the 20-year president of Tajikistan - host country and president of the organization - announced that the group's rotating presidency for 2014-2015 had passed to Russia, and noted that the membership status of observer countries India, Iran and Pakistan will be evaluated during its presidency.