Pakistani Shi'ites buried on Saturday victims of a suicide bombing that killed 65 people in Quetta. 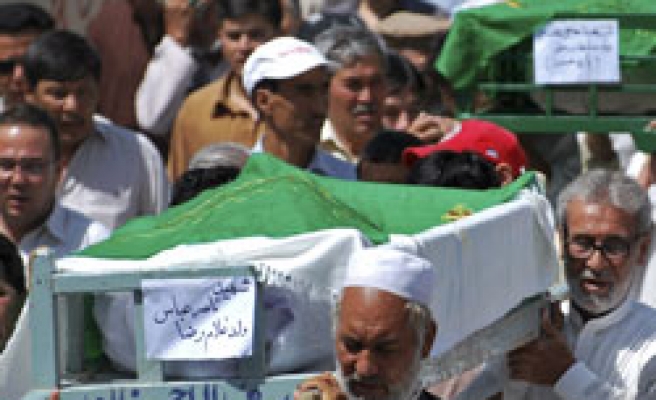 Pakistani Shi’ites buried on Saturday victims of a suicide bombing that killed 65 people in Quetta.

The death toll from Friday's attack rose from 43 to 65 overnight as critically wounded people died in hospitals, police said on Saturday.

In Quetta, the capital of Baluchistan province, shops shut as the city went into mourning, Reuters said. Security was also stepped up at mosques across the country.

Most of the victims belonged to the Hazara minority, who profess the Shiite faith.

Forty-five bodies were taken to their graveyard for burial. Relatives sobbed and wailed as the coffins were lowered into the graves.

"On the one hand, poor people have been stricken by the floods, and on the other hand we are having these blasts. All businesses are finished. What is going to become of this country?" said Haji Abdul Baqi, a rickshaw driver in Quetta.

Lashkar-e-Jhangvi, an anti-Shiite group, said Arshad Muavia, 22, carried out the attack, but according to reports from tribal areas near the Afghan border, a Taliban spokesman claimed responsibility, the English paper Dawn said.

But police said so far, no arrests had been made and that an investigation was in progress.

The latest television footage showed a suicide bomber slowly walking into the middle of the crowd at the rally for al-Quds (Jerusalem) Day, celebrated to express solidarity with the Palestinian people and against the Israeli occupation of Jerusalem. The bomber then detonated his explosives. A huge column of fire and smoke could be seen rising from the site as people fled.

Thirteen killed in US drone strike

The United States has stepped up missile strikes by pilotless drone aircraft into Pakistani tribal areas since the start of 2010.

The Tehrik-e-Taliban Pakistan (TTP) has responded to drone attacks by saying it would strike Western targets.

The attacks in Quetta and Lahore were the first major attacks since the floods which began more than a month ago and swept through the country from northwest to south, leaving an area almost the size of England under water.

Although the water is beginning to recede, large areas are still submerged and some villages in the southern province of Sindh are facing floods for the first time as the Indus river, swollen by heavy monsoon rains, makes its way south to the Arabian Sea.

Many people say they want to return home but do not know how they will manage with their crops and houses destroyed.

"We want to go to our villages but we are empty-handed, what are we going to do there empty handed?" said Fatima Bibi from the Thatta district of Sindh.